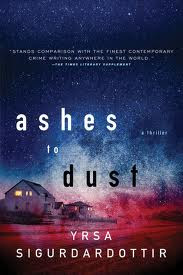 The third of the Þóra Guðmundsdóttir series (anglicized to Thóra Gudmundsdóttir in the US edition), this mystery continues the adventures of the Icelandic lawyer/sleuth who is drawn into the investigation of four old murders and one modern one. Most of the action takes place in the Westmann Islands where houses which had been buried since the 1973 Eruption are being unearthed for a "Pompeii of the North" attraction. The discovery of three bodies and a head in one of the buildings sets off a chain of events concerning the usual family and small town secrets which are Yrsa's stock in trade. Competently written, although Phillip Roughton's translation is a bit clunky at times, the multiple characters and the minutæ of plot elements remained clear throughout. Not so well handled was any sense of plausibility. The story wrapped up a bit too neatly for all of its messy details.

I've already reviewed to first two entries in the series; this one is a little better that the second (My Soul to Take) and much better than the first (Last Rituals). If your taste in mysteries tends toward the "jigsaw puzzle" type, these books might be just the thing you are looking for. The Icelandic references ring true, especially how the unique set of circumstances around the eruption created a massive upheaval in the lives of those who were present. Just after I finished this book, Rúv broadcast a feature on an actual house which had recently been uncovered! (In Icelandic.)

Last Rituals is still on my piles unread. I bought it before I read your review. Yeah well. Maybe I will still like it for the setting.
I'm not sure I like jigsaw type crime novels.

I'll give Yrsa credit- there were no holes in her plot, although one body (instead of three and a head) would have been plenty.

I did love that one, but maybe partly because of the Heimaey setting.