Until last Thursday, I had never dreamt a recipe before. In the dream I was at a country restaurant where the cook offered me some black, tarry chunks of meat.

"It's our specialty, 'Tar Baby Chicken'."

It was delicious, so I asked her what the ingredients were.

"Just regular chicken, with a sauce made from molasses and garlic."

"But isn't that name a bit offensive? Couldn't you call it 'TB Chicken'?"

"Who want to eat chicken with TB?"

"I've got it, instead of Tar Baby just call it The Best chicken."

After I woke up, I was still obsessed by the thought of delicious chicken with a black molasses coating. Checking out the internet, I found just the thing at Allrecipes. I modified the recipe to fit my dream:

Preheat oven to 400 degrees F (200 degrees C).
Season the chicken with salt, pepper, and cinnamon or ginger.
Arrange on wire rack over flat pan or foil.
In a bowl, mix the molasses, vinegar, mustard and garlic.
Bake chicken 20 minutes in the preheated oven.
Coat chicken with the molasses mixture.
Continue baking 20 minutes till black. 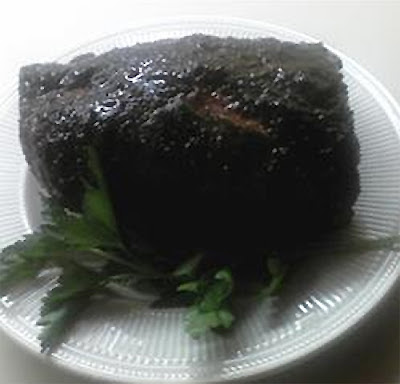 I baked it Saturday and it tasted just as good
as it had been in my dream!

The Cinnamon gave it a light spicy flavor.

Ginger would tend toward a darker taste.

And a tip of my chef Batty's hat to

Even with a nice presentation it still looks like a tar baby. Sounds like it might taste pretty good, though. I don't recall ever having dreamed a recipe. I doubt that I have much talent when asleep.

Lately it seems as if my dreams make more sense than reality.