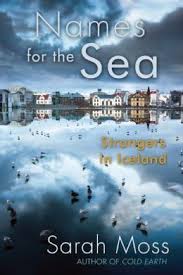 Names for the Sea
Strangers in Iceland


Sarah Moss is a writer and academic from the UK. She spent parts of 2009 and 2010 teaching in Reykjavík, moving there with her husband and two young sons. I got my copy from my blog-pal, DJ Cousin Mary (Thanks Mary!). I was keen on reading it for I had been there in October of 2009. This book is full of information, although I found it presented in a somewhat skewed fashion. There are some very good interviews with interesting Icelanders (these Icelanders were, as usual, very good story-tellers) and there is a lot of detail about some of the places she visited which I found fascinating although those less interested might just see lists.

Actually finishing the book became an ordeal. I couldn’t quite put my finger on it at first, but after a few chapters I figured it out. It was something I’d seen before in Icelandic travel books written by UK writers: a distortion of reality filtered through  “English Myopia”: a sense of superiority coupled with thinly veiled condescension. There was scarcely a page without some form of put-down of Iceland or disparaging cracks about Iceland vis-á-vis the UK. I will grant that the author had walked into a very difficult situation. With Iceland still reeling from a financial meltdown while also experiencing volcanic eruptions (to say nothing of the usual problems of dealing with small children) it is understandable that she would not always be painting a pretty picture. Those circumstances would tax anyone’s patience. But I found that the real turn off was her constant whining (whinging?) about her distastes and fears of virtually anything the slightest bit out of line with her preconceptions. After the twentieth iteration of how bad Iceland traffic is I was quite ready to throw the book in the trash. I’d give you some more examples, but the stern (neurotic?) warning on the publishers page against any such violation of her “moral right” and the threat of subsequent “criminal prosecution and civil claims for damages” prohibits my use of any quotations from the book.  If you do happen across a copy, however, just open it anywhere and read a paragraph or two.

You’ll see what I mean.

Well, you know, grumbling is such a part of UK culture that we don't even know what we did it. It's just expected that you will come in to work every day and reel off everything that is wrong with your job, the weather, your family, etc.

Joking aside, I do see your point, but in a way I respected the author for not portraying Iceland as a utopia and for being honest. I did wish they had gone out a bit more and felt they would have enjoyed it more if they had. I suppose I might also miss opportunities if I had moved somewhere I wasn't passionate about - but she did seem to be passionate following that first trip some years before.

From an outsider's point of view I enjoyed reading a modern expat story, although I can't imagine hoardes of people wanting to emigrate after reading it. :) Perhaps I should recommend this book to all the people who contact me about wanting to move to Iceland...

I wondered about the effect this book might have on would-be ex-pats as well.

I guess I liked it a bit better because I just thought of it as just her personal experience. They were on a very tight budget, were dealing with small kids, etc. I found it interesting that the students in her classes were already parents - when we were in Iceland it appeared to me that a lot of Icelanders had their kids at an earlier age. Also was interested to hear that it was unusual for locals to buy used things and have hand-me-downs.

OTOH, the interviews with Icelanders at the end of the book seemed sort an odd tangent to me.

I enjoyed the irony that when they came back as vacationers, they were able to enjoy themselves much more because they were not as constrained by money.

I was puzzled by her complaints about drivers because we drove all over Iceland and never saw the recklessness she described.

I drove and cycled in Iceland as well; the traffic there was nothing compared to my old daily commute.