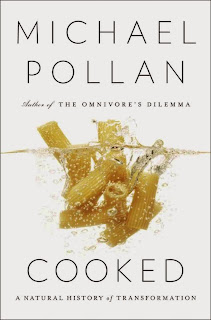 A Natural History of Transformation
By Michael Pollan
The Penguin Press, New York, 2013

“... what was the single most important thing we could do as a family to improve our health and general well being?”


Michael Pollan’s quest for a deeper understanding of  the natural world and our role in it was the germ of inspiration for this exploration of the way cooking has changed our species and its role on earth. He breaks the book down into four main sections: Fire, Water, Air and Earth.

Fire takes the reader on a wild search of traditional barbecue, food preparation in its “purest" form—basically roasting meat over burning wood. He gives a historical background and also works with modern barbeque masters—a real trial by fire.

Water is about cooking in a pot, but Pollan also muses about the way our modern processed foods have taken us away from the way traditional cooking brought families together.

Air covers baking, with an emphasis on wheat and breads and also deals with the health issues caused by refined food.

Earth is about the way microbes in fermentation create cheeses, beer and pickling. He shows how the lack of live cultures in our food also harms our health.

While traveling through Kansas we found our food options limited. We were surrounded by agriculture, yet it seemed as if the only food we could find was made by a big multinational corporations in some distant factories. Reading this book during this part of our trip made that disconnect all too clear. The most interesting part of the book is Fire, mostly due the great characters he finds in the world of professional barbeque. Water is probably the most informative and useful—showing the virtues of slow cooking both in gastronomic and in familial aspects.  I think that Air is the weakest section, it only reaffirmed what I already knew—that baking is tedious and best left to the pros. Earth starts out well with some interesting cheese makers but Pollan loses momentum when covering beer making. What was a compelling narrative turns into just a routine story about hobbyists.