The Artist and the Collector 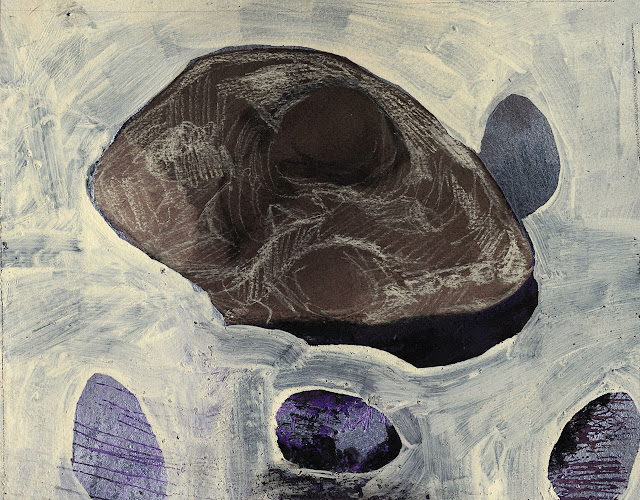 A Sunday morning,  an open studio event for the holidays, the last day of four. A jazz trio was making appropriate noises in the reception area. The studio I was looking for was at the end of a dimly lit hallway.  Walking in, it seemed that except for an inquisitive brown poodle, there was no one there. I began looking at the large canvases on the walls. Some were new, some I had seen before. There were more than a few I would have loved to own: stunning, macabre, masterfully painted, done in a muted Renaissance style. Uneasy undercurrents of death and perversity seemed to be emerging from the paint. A self-portrait of the artist as St. Agatha was profoundly disturbing. After a minute or two, I heard a rustling from the back of the cluttered studio. Turning around, I saw the artist. I had been to several of her events before and had even purchased a small piece. I had always regretted not buying more. Those events were always crowded, attended by a younger art crowd. Today, with only the two of us (and the dog), the mood was very different.

"If you see any specks, they're cloves."

There were a couple of bins of smaller works, pieces within my budget. Many portraits and half-figures, mostly boys and young men; variations on a theme. Some pieces contained old lithographs, transformed with additional drawing and painting. I don't remember exactly how our conversation began, but I did mention that I had purchased one of her smaller works before. She asked what it was, I started to describe it, she knew it right away—even taking the descriptive words out of my head before I was able to speak them. We talked about her art, about the art world, about the difficulty of making it outside of New York or L.A.. I tried, without being too weird about it, to let her know how much I appreciated her efforts, her pursuit of her most singular vision in the middle of flyoverland. I asked about her use of very old photo albums and mentioned I had one she might be interested in.  She spoke:

"Come here, I've got something to show you, something someone gave me."

Hanging on the wall in the back was a memento mori mourning shadowbox, I've seen others, but this one was exceptional.

"It's not the kind of thing people like to have on their walls." She said.

"Is that braided hair sculpture at the bottom?"

"It's strange to think of, to think that a person's DNA is in there."

"There's a lot of DNA lying around this studio."

I did get another small piece, more abstract than most of her other work. We talked a little more, about how slow it was—no one else came in in the half hour I had been in there. Maybe it was the weather?

"My work isn't really popular as a Christmas gift."

A gift to myself, then, the kind of thing I like hanging on my walls.

I wonder how much of the artist's DNA is in it.