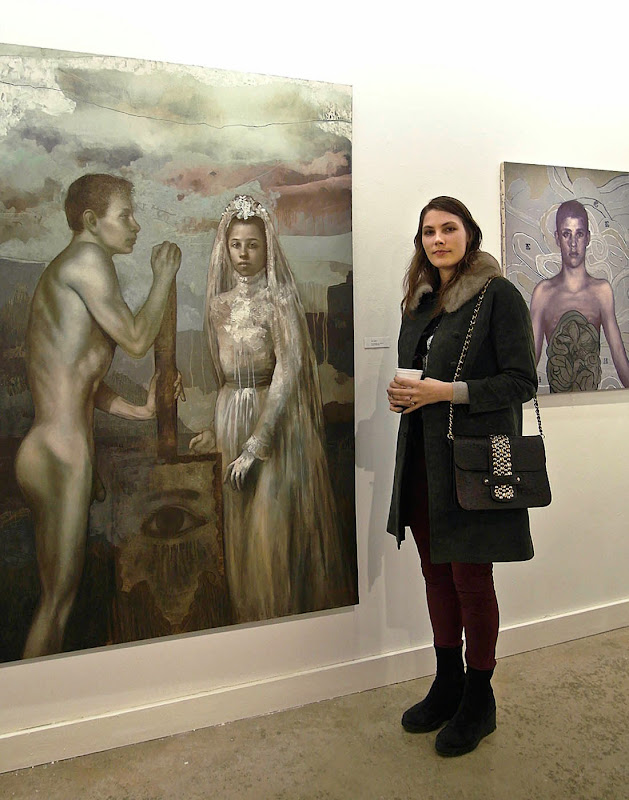 Alternative perspectives to traditional forms are offered by a group of artists with diverse female views of a male world. The artists challenge the viewer to consider new perspectives of visual beauty and male role in our culture. The work is presented in a variety of media including photography, fabric, painting, drawing, and mixed media sculpture.

This exhibition follows in the footsteps of the exhibition "Masculine / Masculine, The Nude Man in Art from 1800 to Present day" at the Musée d'Orsay in Paris, France. A review of the exhibit states "While it has been quite natural for the female nude to be regularly exhibited, the male nude has not been accorded the same treatment." "Adam, The First Man" is an exhibition conceived with exactly this thought in mind. ~ from the exhibit catalog


It isn’t often I get a mid-week invitation to a provocative art opening. Braving the wind and snow, I set my course for the wilds of Brooklyn Park, Minnesota and was rewarded with a small, yet intense show celebrating the nude male form. The rumor was that the show was instigated by women in the school's nursing program who had enough of the female nude in the school's exhibitions; turnabout was fair play. There was a good mix of work on display, nothing that would cause a riot, although some provincials might disapprove.

The most dramatic pieces were the oil paintings by Caitlin Karolczak, I’ve written about her before. This show’s thematic unity made her work appear even more powerful. We talked about the role of the male nude in art and how things are changing and how the naked male figure is still a challenge to many viewers.

Art should be challenging.

I've always been offended by so many naked ladies and so few naked men! In art and in Hollywood movies (which are also art). Looks like a great exhibition.

P.S. I commented here, then clicked on another site I frequent, and there was an ad for some sort of gamer thing-- I don't know what it was, but it had this lady's breasts just popping out at me, just barely covered with some little cloth thing. As I tried to ignore it, I suddenly noticed myself ignoring it. There are so many breasts, everywhere. It's just annoying. What if they were required to have an equal number of male external sex organs as women's? Wouldn't that look strange? Barely covered phalluses, everywhere... like ancient Greece.

Or scrotums (scrota?) I think it might be a hair thing...

Maybe it's scroti. It is about time men's bodies got some artistic recognition in modern times. Cellar Door is right about breasts everywhere. Not saying that I don't appreciate the female form, but it is inundating in pop culture and advertising.