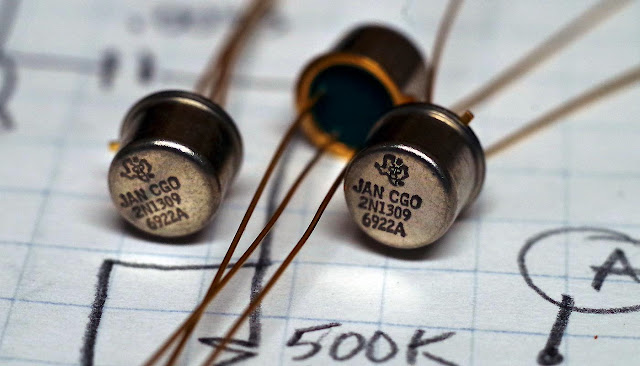 I’ve used the recent cold weather as an excuse to stay indoors, spending an afternoon sorting through a couple of hundred old transistors which I had purchased 20 years ago at a yard sale. When I was a teen I built a few “fuzz-tone” guitar effects (as heard on The Stones’ hit record Satisfaction). I thought it might be fun to see if I had the right parts to build another one. The critical part was a now obsolete germanium transistor—the first practical solid state amplifying device. I found that I had a couple of dozen suitable models, the 2N1309 pictured above were probably my best bet, being military grade (JAN= Joint Army Navy) and of newer manufacture (date code=6922, twenty-second week of 1969).  Some of these transistors have been recently offered for sale at $80 each! I'm not sitting on a gold mine, however, for the germanium crystals used in them is not stable; most of these new old stock transistors are "leaky" (or dead) and they really aren't that rare (wishful thinking on the seller's part?) They are still popular with boutique guitar effect makers for their flaws contribute to the sound. I just might breadboard a circuit to see if the ones I have are any good.

The Russian chemist Dmitri Ivanovich Mendeleev predicted Germanium’s existence in 1869, but it took nearly twenty years for it to be discovered and analyzed. Germanium continues to be used in electronics. It was declared a “strategic and critical material” by the US government in 1987. It is usually alloyed with other metallic elements to produce materials with unique properties. It is a vital element in the manufacture of fiber optic cables, solar cells and infra-red sensors. It is also essential for wireless devices. You probably have some germanium in the phone in your pocket or purse!

Modern "vintage" fuzz tones might make you a few bucks if you pursued it. When you speak of Germanium all I can think about is that he is one of the Jacksons. Sorry!

Believe it or not, there are scores of guys making and selling fuzz-tones and distortion units. I should have kept making them when I was 16, I'd probably be pretty good at it by now.