The Hay Officer of Hörgár Parish 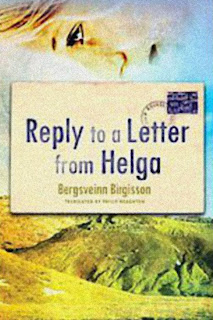 Reply to a Letter from Helga

A letter sent to an old lover constitutes this short novel of desire and regret. This is a deep look at the psyche of an Icelandic farmer, Bjarni, a man who is torn between farming and the allure of a woman and a modern life in Reykjavík during its occupation during World War II.  It would be hard to find a story about Icelandic farming that didn't include sheep, this book is no exception. Sheep are the third partner in this triangle and although the story is somewhat sad it is a sadness born not of despair but of conflicting desires.

Bjarni tells the story of his life and in doing so tries to justify his actions to Helga via a series of anecdotes, some of which are very funny, some are quite sad, others are quite earthy; most are a mixture of the three. There is a lot of rural Icelandic culture here, as well as many literary references which are fortunately explained in a glossary. I found the book to be fascinating, although a casual reader without any experience in Icelandic Literature might have a hard time warming to the distinctive perspective of this book.

This popped up on my suggested list from Amazon a week or so ago. It's queued up in my Kindle and nearly next on the list.