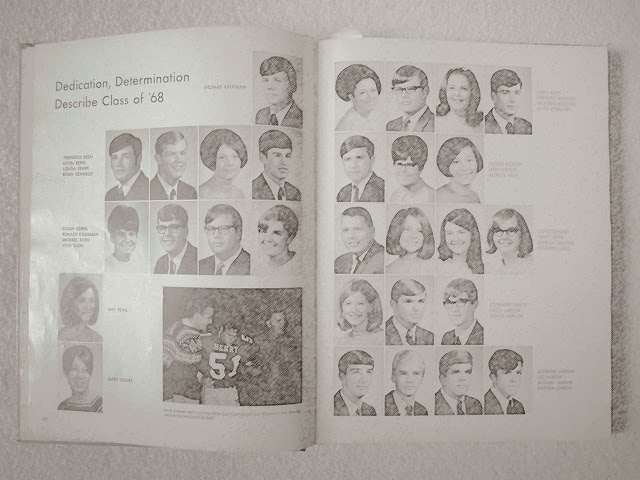 1950 was the year that the boy's name Steven, Stephen or Steve reached its highest popularity in the US. Eighteen years later, out of 189 total boys names, my high school graduating class had a total of 18 Steves ! It was common to have three or more Steves in a single classroom, it would be rare if there wasn't at least one.  IRL I'm a Stephen; I used to obsess about it, mentally linking my name to famous Stephens, now it hardly matters. Another Steve from my high school class runs what I call "The A.V. Club": an every-other-month meeting where six to 10 of us get together and conduct elevated discourses on The Great Ideas of Western Civilization, or something to that effect. There have been as many as four Steves at that table; an astounding ratio. We joke that there has to be at least two to make a quorum. The Steve who organizes the club meetings also runs the class reunions and keeps tab of vital statistics. Whenever a classmate passes away he sends out emails with a link to the obit. A Steve showed up in one of these communications the other day, we lost one in college, and another a couple of years ago. Not so many Steves now—I should be thankful, it could have been me..

The surviving Steve's could chip in a few bucks and buy some appropriate Steve related memorabilia, last Steve standing takes all—a comedy record by Steve Allen, the biography of Steve Jobs, a travel DVD from Rick Steves and, dare I say, a Stevie Nicks solo album?

And there seems to be a whole pile of Heathers that are around their early thirties.

My class had nine Jenifers. My best friend was Jenifer, and one day she said that she should change her name to something crazy like "Zgjenyue," to differentiate her. She was joking, but I don't always pick up on sarcasm, and I've called her Zgjenyue ever since.

You're the only Stephen I know at present. I used to know a few, but we lost touch.

Once, at a small gathering I attended, Bucky (real name Robert) pointed out that every male present had the name Robert on his birth certificate- although everyone went by something else. All the Roberts had a good laugh over that.

Jono~ I missed the Heather phase, although the movie was a hoot.

SLM~ I've been surrounded by Jennifers most of my life, including a sister and a niece.