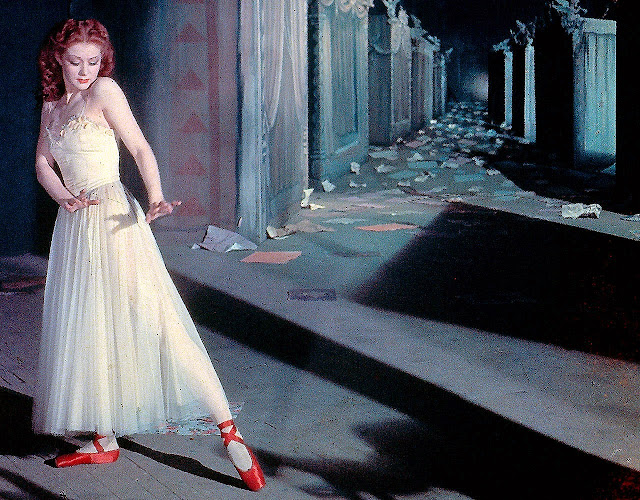 There's little need for me to explain the above image to those who have been initiated.

For those who have yet to experience this gem, I'll state that it is the best dance movie I've ever seen, many have said it is the the greatest ballet film ever made. The Red Shoes is a work which stands on its own apart from the dance genre: it is simply a great film. Restored to its original Technicolor grandeur on Criterion DVD, it allows Moira Shearer's natural red hair to perfectly complement the cursed Red Shoes of the Han Christian Anderson fairy tale. The story of the film's origin is complex, Roger Ebert can fill you in much better that I ever could. For all its stylized artifice, the dance scenes are real. Done in long takes, the actors/dancers were all professionals. The closeups of Moira's character "Vicky"  allow the viewer to enter into an intimate space with a consummate artist: 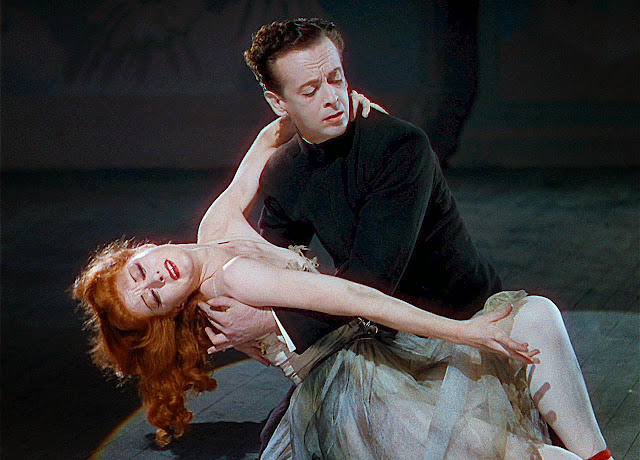 Although the story has a romantic element, it is really about artistic obsession; the heights of glory it can reach and its depths of conflict and despair. There is a sub-theme of suppressed homosexuality and the perverse 'family' of the ballet which adds an exotic dimension. The exterior scenes, shot on location in London and Monte Carlo, as well as numerous European hotels and theatre interiors, transport the viewer to a real world which seems as magical as the staged ones in the ballet.