This is chapter 44 of The Matriarchy, a serial fiction novel on FITK 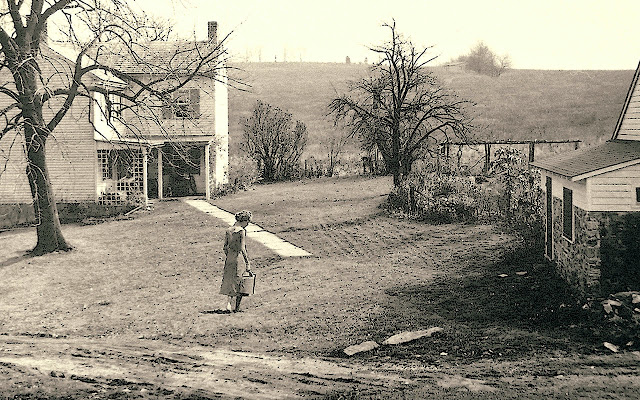 As Sean and Mary drove down the driveway, Sean glimpsed his Aunt Tina in the rear view mirror, walking back toward the house. He was suddenly overcome with emotion.

“I feel as if I’ll never see her again,” said Sean, “That farm is the closest thing to a home as I’ve ever had and it will be gone by the end of summer. And how much time does Tina have left?”

“We’ll always have her, and the farm,” said Mary, “It’s become part of us. When all this settles down—when the baby comes—we’ll get a place of our own–a real house in a nice neighborhood—and Tina can come and stay with us.”

“Will our lives ever settle down? How can they? With the minions of Satan aligned against us?”

“They have always been against me: black, adopted, female—,” said Mary, “—and, worst of all, intelligent. But they’re only people, Sean. People who cherish their hatred, to be sure, but people nonetheless. They nurture their hate because its the only thing they can feel. Hatred is a jealous emotion, it drives out love, hope, compassion. It’s the ultimate self-feeding addiction.”

“When I was younger, I felt that I could do what I wanted, that I was invisible to the powers-that-be,” said Sean, “That’s why I went to work for you. The perfect job for a ‘spook’, spying on others, leaving no trace. Then I realized that I was only working for them. And now I am, to those powers, a liability, an expendable tool. Do you think The Brotherhood will rest before they kill me?”

“Before they kill us,” Mary said with a grim smile, “It is now apparent that eliminating their threat must be our top priority. Or, to be more realistic, our job is to plant the seeds of their self-destruction.”


The Brotherhood had gathered for a special meeting concerning its search for Sean Carroll and Mary Robinson. The members spoke quietly among themselves until The Leader gavelled the meeting to order.

“Brethren. I’ve called this meeting to announce some news in the affairs concerning Emily’s heir. Our sources have discovered that Sean Carroll and Mary Robinson are in rural Northeast Iowa, near the town of Decorah.  They have recently gotten married and have been staying at the farm of Tina Carroll, the oldest daughter of Emily. The remote location of the farm will aid the neutralization of these threats to The Brotherhood. As per our by-laws, any covert action involving termination must be approved by the full assembly. Are there any questions?”

The room was silent.

A chorus of ayes sounded.

“An operative has already been dispatched. He will arrive at the farmhouse around 0200 hours tomorrow and will terminate its occupants and destroy the structure.”

One of the men at the table spoke up.

“This operative is fully qualified?”

“Is one man enough?” said another.

“He is a master of his craft and completely untraceable. A single operative greatly reduces the risk of exposure,” said The Leader,  “There will be no slip-ups this time. Any further questions? None? This meeting is adjourned.”


Peet’s coffeehouse was bustling, filled with working people getting their morning fix of coffee and pastries.

“No, sit, please,” Molly Berenson said, without looking up from her phone.

The two women acted as if they were strangers. Sally took out her phone and began to check her email. After a few minutes, without eye contact, she began to quietly speak to Molly.

“The thumb drive is under my napkin. After you upload the data, smash the drive and throw the pieces at varying places in the Sound.” Sally got up to leave. As she put her phone in her purse she whispered:  “Be careful, Molly. We’re dealing with are some really sick fucks. If you need to contact me, we can do coffee again. Don’t open your door to anyone you don’t know.”


“I thought we’d take the Northern route: through Minneapolis, Fargo, and then spend the night in Billings,” Sean said, “It’s a stretch; it will be late when we get there. I don’t think anyone is following us, but it doesn’t hurt to change things up.”

“Billings? I’ve got some friends there,” said Mary, “What time do you think it will be when we pull in?”

“Friends?” It took Sean a few seconds before he remembered Mary’s encounter with the coyotes, “Oh, right. Fourteen-plus hours on the road. We left Tina’s at seven. With pit stops and the time zone change, I would think about ten tonight.”

“If we leave by eight-thirty we should be in Seattle by eight p.m.”

“And then the fun begins,” said Mary, “I wonder what the crisis is that ADR is experiencing?”

“Hopefully, it won’t involve a cabal of murderous sociopaths,” said Sean, “There’s the exit to Highway 52, we should be in Minneapolis before noon.”

“I’ll be napping, wake me if you need a break.”

When Mary woke up, they were already far beyond the Twin Cites.