This is chapter 47 of The Matriarchy, a serial fiction novel on FITK 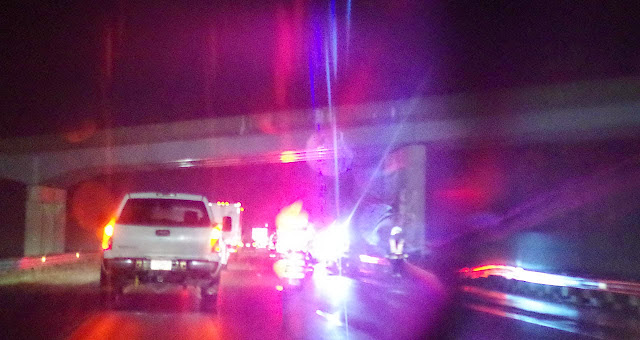 The precipitation had begun as mist, somewhere in Eastern Idaho. By the time Mary and Sean reached Washington State it was raining in a steady rhythm, punctuated with sheeting downpours. Mary had been driving all day when they stopped in Spokane for lunch. After they had finished, Sean took the wheel and was about to enter the on-ramp when Mary spoke:

“Pull over Sean, right there—where that hitch-hiker is standing.”

A young woman with a backpack was standing on the shoulder with a soggy, hand-drawn cardboard sign that read ‘Seattle.’

“Hop in, it’s your lucky day.” said Mary as she pointed to the back seat, “There’s a blanket you can use as a towel back there.”

“Thanks. I rilly ‘preciate it,” said the young woman, “However far you’re going, as close as I can get to Seattle, anything would help a lot.”

Sean slipped his ring on.

“I’ve got a feeling about her.” thought Mary. “I can’t quite explain it, but it seems as if I have a window into the near future, like a preview of coming attractions. There’s something going on here.”

“Will do." thought Mary. She turned her attention to the woman: “He’s Sean and I’m Mary. What brings you out on a night like this?”

“I’m Jo. I need to get out of Spokane. Bad. Thanks again for picking me up.”

“Do you have someplace to go in Seattle? Not the destination I’d pick if I wanted to get out of the rain,” Mary said.

“Definitely not my idea of a fun time,” Mary said, “But those kinds of problems exist in Seattle, too.”

“Sometimes I think it’s me. I seem to attract problems,” said the young woman.

“So, you know, say I’m at a party, right?” said Jo, as she toweled the water from her hair. “And there’s different kinds of guys there. Some are cool, some are ‘hipsters’, some are squares.”

“And I end up with the cool guys, who turn out to be psychopaths,” said Jo, “Aren’t there any regular guys?”

“None of the above. I wouldn’t call you a ‘regular guy’ either,” said Mary, “It took me a while to figure out what you were… a human, I guess.”

“How did you two get together, if you don’t mind me asking?” said Jo.

“She was my boss,” said Sean, “Still is, in some aspects of our relationship, at least.”

“I don’t see how that could work,” Jo said, “Maybe that’s where my problem is.”

“This is the way I see it,” began Mary, “A couple, when they first get together, it’s very exciting, it seems as if an infinite future of possibilities presents itself. Later, when their lives start to become intertwined, the differences between them become apparent. If they can ‘fill in the gaps’ in each others makeup, and allow the incompatible areas to exist, it can work out. It isn’t as exciting as it was in the beginning, but nothing is exciting forever. I think when people get involved with drugs they think it is a way to make the excitement last. But some of the best things that make life worthwhile aren’t exciting.”

“I just wish I could live without all the drama,” Jo said, “Jesus, why does everything have to be so hard? Why am I so dumb?”

“Don’t be so hard on yourself.  Jesus had his share of problems, too,” said Mary, “But the best thing he did was to talk to women—really talk—without judging them. He even had them in his group of disciples, which might be the most distinguishing thing about his teachings. Too bad it was corrupted so completely.  It’s the problem of philosophy. Any system of belief turns out wrong, sooner or later, once it becomes dogma. Reality is vastly more complex that any philosophy the human mind can construct."

There was a prolonged silence. Finally, Mary spoke again: “Sorry, I didn’t mean to go all metaphysical on you.”

The rain continued as they drove through Washington. As Sean listened to the women talk through the afternoon, the pattern of their speech blended into the beating of the rain on the windshield.  He kept out of it, preferring to absorb their conversation directly, without distorting it by butting in. By the time they reached Issaquah it was after dark, and traffic had slowed to a crawl. Flashing warning lights put Sean on edge.

“Something going on up there,” said Sean. He could smell diesel fuel, and as they crept around a curve, he could see that a Semi had jack-knifed and was blocking the right two lanes and the shoulder. “It will be after ten by the time we get into the city.”

“Seattle traffic sucks,” said Mary, “Jo, where can we drop you off?”

“By the water tower, sure, I know where it is, no problem,” said Sean, as they drove past the wrecked truck, “No problem, not compared to that poor guy.”

The first responders had already draped a sheet over the driver of the rig.

It was nearly eleven when they dropped Jo off. Sean waited until she got inside. Mary wrote the address down.

“Do you think we’ll be seeing her again?” said Sean. “You two hit it off.”

“We might. She’ll be O.K. one she gets her head turned around,” said Mary, “And I could use a friend.”