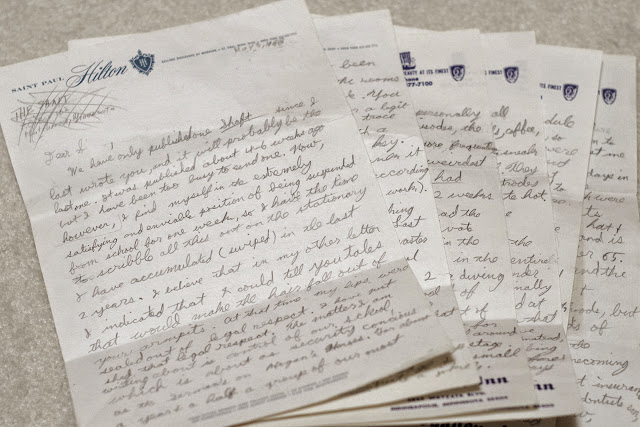 We have only published one Shaft* since I last wrote you, and it will probably be the last one. It was published about 4-6 weeks ago but I have been too busy to send one. Now, however, I find myself in the extremely satisfying and enviable position of being suspended from school for one week, so I had the time to scribble all this out on the stationary I have accumulated (swiped) in the last 2 years. I believe that in my other letter I indicated that I could tell you tales that would make the hair fall our of your armpits. At that time my lips were sealed out of legal respect. I have just shed that legal respect. The matters I am writing about is the control of our school, which is about as security conscious as the Germans on Hogan’s Heroes. For about a year and a half a group of our most ingenious students have gradually been acquiring keys to a number of the rooms in our school. The process is simple. You borrow the key from a teacher for a legitimate reason. While you have it you trace the outline on a piece of paper with a sharp pencil. They you return the key. If you obtain the correct key blank it is not so hard to file out the shape according to the pattern. (Wax impressions don’t work). The key you make may need some retouching but you usually can get it to work. Last spring these students obtained a master key to the whole inside of the the school & since then nothing has been safe. 2 ways were discovered to get into the school at night. One was through a trap door on the roof & one was a broken door that had never been fixed. A lot of weird things happened. Also, a great number of other students knew about the keys. In fact, it was common knowledge & quite a joke on the administration. Although I personally was not involved in most of the episodes, the other two Shaft-types were more frequently.

Our senior class is one of the weirdest to go down in a long time. We had quite a conspiracy until about 2 weeks ago. Weird things happened, & we had the run of the school. We investigated private files, sat around drinking pop in the faculty room, went swimming in the pool, (one guy brought his scuba equipment), and performed a host of other minor pranks. Since most of the guys were the lighting crew for all school events, the action centered around the bridge (light room) above the stage. They had a safe in there with a small stove, a coffee pot, & other utensils. We have pictures somewhere of all the guys eating spaghetti & meatballs, coffee, cocoa, hot dogs, etc. They used to sneak in during their 5th hour study hall. They actually cooked wieners on the electrodes of the big rheostats, which get quite hot. At any rate it was quite a scene until we screwed it up.

*The Shaft was a short-lived underground newspaper in the high school of a small town in western Minnesota.

I received this letter because we had exchanged our respective newspapers.