This is chapter 78 of The Matriarchy, a serial fiction novel on FITK 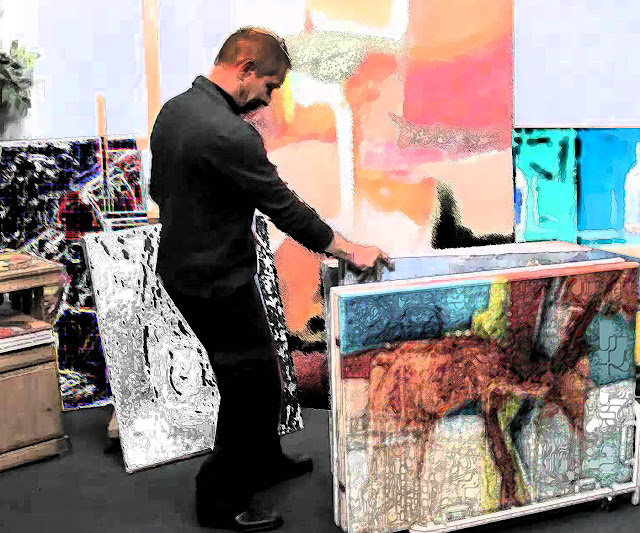 Friday afternoon, Sean got a call from Fed-Ex. The driver required a signature, as well as someone who could take delivery of the half a dozen large boxes and two smaller ones. The largest box was almost six by four by three feet, the other large boxes were about four by three by three feet. The large boxes were heavy as well. Sean surmised that they held Emily’s canvases protected by plywood. The two smaller boxes were quite heavy for their size, Sean thought that they held portfolios. He had gotten a flat cart from the building’s supervisor and after he had loaded it he took them to the elevator and went up to Emily’s old apartment.

Jo wasn’t living there yet; she was working a double shift at the coffee house so she’d have all Saturday to move. Sean brought the boxes into the den. As he unwrapped the works he was awestruck at Emily’s art. He had taken some art history in college and was familiar with the Modernists. To his eye, Emily was as good as any of them. He carefully stacked the art against the wall. The canvases took up nearly half the floor space. Emily’s easel and desk nearly filled the rest of the room. He set the portfolios on top of the desk, putting her recent work in a drawer.

With some trepidation, Sean opened the top folio. The first few drawings in this new group were line drawings, ink over pencil, similar to the ones that Mary had uncovered in Decorah. They were carefully rendered scenes of New York City; Sean thought them to be interesting from both a historical and artistic perspective. The next group of images contained a mixture of charcoal and pastels: impressionistic studies. Sean thought them to be extremely fine. The last batch of work in the top portfolio was similar to the spirit paintings. Sean had looked at his Grandmother’s new ‘spirit paintings’ and had been disturbed by them. They were nearly chaotic but retained just enough recognizable imagery to elicit a visceral, possibly subconscious, response. Sean gave these old ‘spirit’ paintings’ a cursory glance before closing the folio. The second folio was made of leather, with a hasp and a small padlock on the flap covering the opening. Sean thought that Mary would be able open it without having to break it. He picked up the folio and left the study, locking the door behind him before going up to his apartment.

Mary had returned from her meeting with Jo. She was trying to find a comfortable position on the sofa when Sean returned with the folio.

“I take it that you got Emily’s artwork?” Mary said, shifting her body from one side to the other, “What do you think?”

“It’s great. All of it. I brought this portfolio down—it’s locked—I thought you could open it without breaking it.”

“Get me my manicure kit, on the top shelf in the bathroom closet,” Mary said, “I’ll do this in the traditional way, I wouldn’t want any magic tricks interacting with its contents. Could you get me a mug of tea—the Tazo wild orange—if you would be so kind?”


Denny Orlean, the editor of techcreeper.com, reread the lead article slated for posting next week. He thought it was a little slim, but figured it would be enough to prime the pump. Denny knew from experience that the momentum of a story like this was more important than the content. But there would be plenty of content in this story. He had long known that there was something fishy about Sean Carroll and Mary Robinson.  They had been in the middle of a big-time cover-up and had come out of it smelling like a rose, and with a big cash settlement when Mary sold her somewhat sketchy business—a business that was also involved with the death of Senator Clarkson’s son Billy. Right after the sale the couple had disappeared for several weeks and when they were finally spotted in Seattle again Mary was obviously pregnant. Then came the murder of Sally O’Donnell, who was a key player in the middle of that Billygate affair.  Right after the O’Donnell murder, Sean and Mary disappeared again for several weeks. Something bigger was being covered up.

He was just about to hit ‘publish’ when his lead reporter, Dick, called:

“Sean has been named an heir to an estate of a Virginia investor. It’s worth millions. I don’t have the connection fully hashed out yet, but the deceased was a big supporter of Senator Clarkson’s presidential campaign a few years ago.”

As soon as Dick hung up Denny received another call, this time from Elly, his other main reporter on the Carroll story.

“Elly here, I don’t know what it means, but a Fed-Ex truck just delivered a bunch of large boxes to Sean Carroll’s apartment. I saw Carroll sign for them.  I’ve got a contact with Fed-ex who had checked the manifest. The packages came from Virginia.”

“Great, it ties in with the Carroll story. Do you know who sent it?”

“OK. Thanks. If you have any follow-up on the packages let me know.”


Sean brought Mary the kit and her tea and then sat down beside her. Mary easily picked the lock and opened the folio. There were three bundles inside. Sean spread them  out on the coffee table.  The first bundle was small. It contained a notebook, filled with what looked like Emily’s handwriting.

The next package was full of sketches, mostly incomplete. Sean put that aside as well. The third package was wrapped tightly with a tightly knotted string.

“Should I cut it open?” asked Sean, “Those knots aren’t going to open easily after seventy years.”

“Use the scissors,” said Mary, digging through her manicure kit. “I don’t think we’ll be destroying any provenance if we do.”

Sean cut the string and gently removed the wrapping paper.

The drawings in the third package were erotic—absolutely pornographic in detail, yet as finely drawn as any of Emily’s other works. Sean leafed through the drawings slowly, showing each one to Mary.

It was a drawing of a naked couple on a sofa. It was easy to see that the woman was Emily. The man was quite dark and obviously aroused. Emily’s hand was caressing the man’s inner thigh. As they looked at it, Mary placed her hand in the same position on Sean’s leg.

“John De Conqueroo,” said Mary, “We’re going to have to look at the rest of these later,”