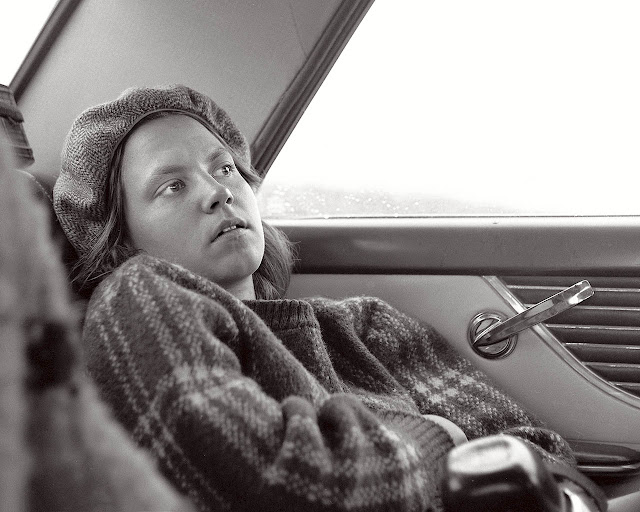 In the mid seventies, five young women I know had sort of a girl-gang thing going—they had been tight since grade school.  I got to know them when they started hanging around a band I worked with.  We hit it off in a low-key way. They started bringing me along on some of their adventures. At the time I was going through a horrible slow-motion breakup with a woman I had been living with. Being able to escape that situation, if only for a while, gave me an opportunity to interact with the opposite sex in a friendly, non-neurotic fashion. These day-trips were a lot of simple fun. We would go out to the country: sometimes hanging out in a local tavern, or spending time at the old farmhouse, or just driving around. We may have conducted some herbal experiments as well. I took pictures.

Last Sunday The Weaver and I spent the day with four of the women who had been in that group. We were joined by Dan and Mary, who had joined this circle of friends in the eighties. They run a restaurant which holds special art-related private events from time to time. We had been talking about those old times and Mary mentioned that I should consider having an exhibition at one of their events. When I told her I'd think about it, she said she'd like to schedule it for May.

Today I began to look at some of the image files from that era. My photographic technique was somewhat haphazard at the time, but I did manage to find some that might be good enough to show. A bigger problem was the personal nature of the images. An impartial observer might find them lacking in interest, but for those involved they would certainly have an emotional impact. One of the "girls" died years ago and is still sorely missed.

I'll have to think long and hard about this opportunity.

I am guessing that you're too self-critical. I think you might be surprised at the interest in those pictures.
Glad you had a group of sane friends to help you through the break up.

You're so talented. It would be an opportunity to show something of your work. People are begging you to, it sounds like. Perhaps inducing an emotional reaction would help people come to terms with past events?

I scanned a bunch of the old negatives today. It was a bittersweet experience.