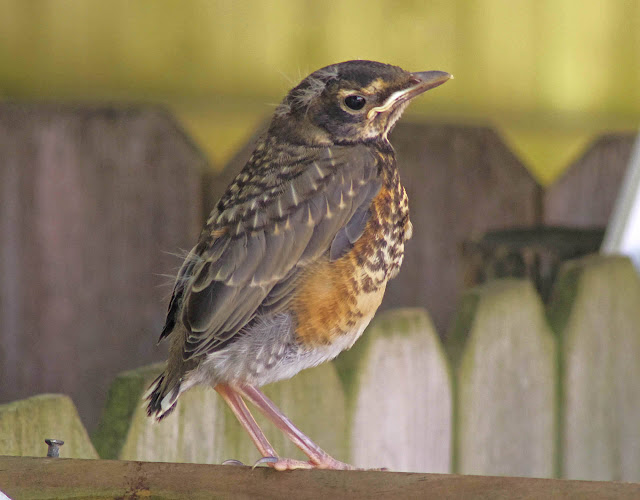 A bit of domestic crisis over the weekend.

The fledgling pictured above was not quite ready to make it on its own in the big bad world. The parent was perched in a tree, clucking while the young bird was hopping around my back door, moving to the foliage on the west side of Flippist World Headquarters when I made my exit. That side of the house is a veritable cat highway, not the best place for a little birdie to hide. It could fly a couple of feet, but would be unable to escape the clutches of a hungry feline.

Fortunately, it fluttered up to the top of the compost bin (where I shot the picture), its parent came by with a worm, and, suitably nourished, the youngster flew over to the neighbor's yard which is completely fenced in and, hopefully, free of cats.

A few days later, while moving the lawn, I came across one of its less fortunate cousins on the boulevard. A fierce windstorm had knocked its nest out of the tree and it was lying dead beside it. I respectfully covered the little corpse with grass clippings and resumed mowing. Later in the day, when reading in the bower, I saw what I assumed to be the fledgling from the previous weekend. Still not flying very well, but it was getting by with a hop and a flutter.

Fingers crossed...is it a robin?

It's a Robin, I saw him again today. He's doing OK.

The mortality rate is high for birds. It'll be nice when its tail grows in.