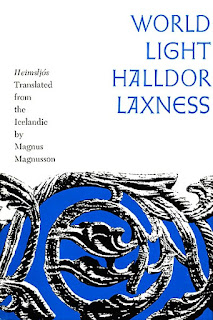 This 500+ page novel is from the late 1930s, when Laxness was in his prime. He had recently completed Salka Valka and Independent People and this story of the hapless poet, Olaf Karason of Ljosavik (loosely based on the real-life failed poet Magnus Hjaltalin Magnusson) can be considered as part of a trilogy concerning the transition of Iceland from its near-feudal society of the 19th century into the modern world. The social unrest and upheaval depicted in each of these books serves as a backdrop for the main characters' struggle for existence. The difference here is that the protagonist is, by the circumstance of his upbringing (told in Dickensian detail), is nearly an imbecile when it comes to dealing with the hard realities of living in poor Icelandic fishing villages. He overcomes years of illness at the hands of his foster family, finding solace in his “poetry”, although much of what he writes is sentimental doggerel for illiterate suitors. He is roundly criticized as a wastrel but does manages to eke out a meager living writing and depending on charity as well as being supported by his long-suffering “betrothed”.

The strongest sub-theme is Laxness’ exploration of relationships between men and women. Olaf, with his delicate features and sensitive nature, has no trouble meeting women. His desire is strong; his attention span is short. The woman with whom he does “settle down” is a epileptic older woman with attachment issues. He feels bound to her, fathers two children with her (both die in childhood), but his heart is restless. I got the impression that Laxness was working through some of his own personal issues he was experiencing at the time.

A furtive, meaningless coupling with a dim teenage girl causes Olaf to be sent to prison. In prison, he has a vision of his perfect soulmate, this vision is transferred to a young woman he meets while boarding the trawler that is returning him to his village. She resists him at first, but ultimately succumbs to his charms, only to leave him to return to her regular life. They live on opposite sides of a glacier and after he learns of her death, Olaf climbs the glacier to join her in paradise.

This sounds somewhat corny, and although Laxness can be comical at times, he never ridicules the passion of Olaf, or any of the other characters, for that matter. Laxness understands that the lives people live are not necessarily the ones they would choose for themselves, and there is no shame in living a humble, unexamined life.

It has been a while since I read that. You've got me thinking about taking a break from Scandinavian crime stories and rereading Laxness. Laxness inspired me to make up poetry while mowing pastures. I never wrote any down, but enjoyed the process while doing something that didn't require a lot of concentration.