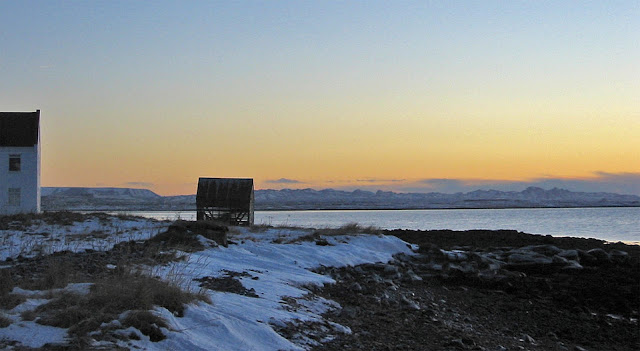 When I was a kid on the beach in the summer, I used to always wonder what it would look like there during the winter. How does snow look on a beach? Would there be ice on the ocean anywhere? Since those days, I've had plenty of chances to see snow on the sea while living here, but I've never really gotten up close and personal, so this afternoon I went down to where I'd gone back in August to see what the shoreline looked like frozen.

The snow along the shore was almost untouched by tracks as I waded through the ankle-deep snow and down to the black sand beach. It was low tide so the frozen sand expanse reached far out to sea below the grass and rocks, exposing kelp and tiny tide pools. The kelp had been completely encased in a prickly layer of frost, and the rocks along the edge of the shore were similarly frosted. Out to sea, the black silhouette of a single seabird bobbed in the calm water, and overhead a myriad of tiny planes were angling in to land.

On the shore, the rocks that edged the beach curving to the south were completely enfolded in ice, shiny like glazed German Christmas cookies, and across the bay, Bessastaðir´s tiny assemblage of buildings hunkered beneath the ghostly pastel formations of the mountains. I stood there on the shore for twenty minutes, watching the sun-glow fade from the houses on the coast, and listening to the swans call to each other as they flew overhead. The landscape was so static at that witching-hour, the tide pools still and frozen, the sea empty of ship traffic, and the sea-path behind me quiet save a few hardy walkers with a squirmy flock of King Charles spaniels.

Since that quiet moment hours ago, the wind has started to whistle again, the clouds drifted in, and the darkness has closed around us. Just like so many experiences here, the moment was fleeting yet incredibly memorable.