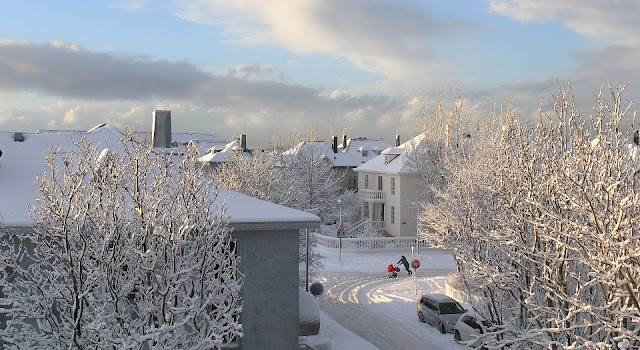 Am reporting today from the almost-Arctic town of Akureyri. I arrived yesterday with a plane full of co-workers, and although half had intended to fly back yesterday, everyone got stuck here overnight due to high winds. The airport here is on a little flat of land that juts out into the massive fjord where the town is located, so the combination of cross-winds and tiny planes meant we were all isolated. I’m told that this can happen often, and we discovered several others in the same hotel that had been similarly grounded by the weather.

Sadly, it was also very warm and cloudy, so the famous snow was dingy and gray, and the roads full of ice. Everyone had good times sliding up the hill to swim after work though, then back down again afterwards. We dined at Strikið, the top-floor location offering views across to the tiny lights on the opposite side of the fjord in one direction, and the illuminated facade of Akureyri’s iconic church the other direction. The wind continued to howl as we ate, bending the windowpanes, jangling the Christmas lights strung along the stairs to the church and making the stars suspended over the streets below sway crazily.

Later we had coffee at M’s house, full of wood trim and red-checked curtains. We had freshly-baked Icelandic Christmas cookies, the rare and special kind with the chocolate top, the buttercream filling, and the almonded bottom. Everyone keeps telling me about how annoying and difficult they are to make, and yet everyone keeps on making them. My Icelandic speaking abilities are still to the level that makes me mostly a spectator but after a day of only-Icelandic meetings I was saturated enough to be keeping up with almost everything, jokes included.

It’s hard to explain the surreal feeling of being there in that house, knowing that outside the massive snow-covered mountains loom all around, the wind sweeping down their dark and uninhabited slopes. This was ordinary life for the others at the table but for me I couldn't stop mentally comparing to the other life I could have had, and did have, in a place where the weather doesn't hold such sway over daily life, where I'm not infused with this ancient language. Two years ago I didn’t know a word of Icelandic, and now some element of it will never not be a part of me. Soon I might even be able to participate in the conversations, but for now I'm happy to at least be able to follow along.

It’s 11 am now, and the rising sun is just turning the clouds above the mountain out the window to golden peach. The wind's still sending the clouds surging across the fjord, and I can see the water churning angrily, even though we’re miles away from the open ocean here. In only three hours, the light will again be fading, and a few hours later, if the wind releases its grip on us, I will return to the chaos of Reykjavík.

Six months later I would be in Akureyri with my brother before heading north about thirty miles to stay on a horse/sheep farm and spent Sjómannadagurinn (Seaman's Day) out on a fishing vessel. It was clear and cool as we steamed toward Hrisey, the Pearl of Eyjafjörður.

It hardly seems as if ELEVEN years have passed since Elise wrote this.