The Saddest Song in the World

I Can Never Go Home Anymore ~ The Shangri-las 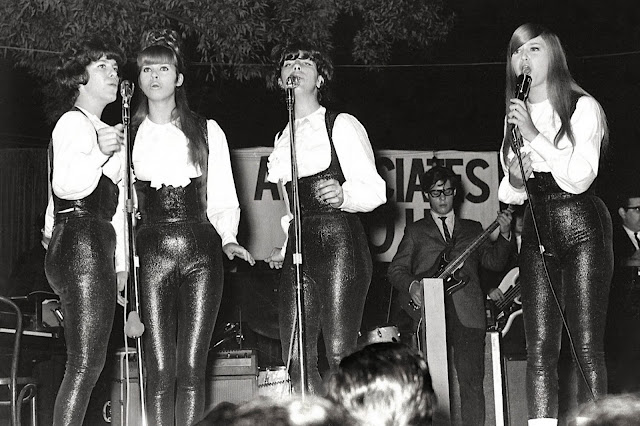 The Shangri-las, queens of teen-age angst, had this, their last and angstiest top-ten hit, in 1966.

They were a real vocal group, not just an act that was thrown together in the studio by an anonymous producer.

It consisted of two pairs of sisters who had been known to harmonize on the streets of Queens. They were discovered by the legendary George (Shadow) Morton, who wrote and produced many of the girls (at the start they were girls, still in high school) records. Morton and the girl group even had their greatest success during the height of the British invasion! The Shangri-las toured with many of the stars of the day including: James Brown, The Beatles, The Rolling Stones, The Beach Boys and the Zombies. Iggy Pop was in one of their road bands! Hugely influential, they have been given increasing credit as major influences for many modern performers, in a wide variety of fields. The most prominent of these was the late Amy Winehouse. Before she recorded her Grammy-winning, multi-platinum Back to Black album, she gave her producer a bunch of Shangri-las records and told him that “I want it to sound like this.” This is what Amy said about them:


“I love the drama. I love the atmosphere. I love the sound effects. And they wrote(sic) the most depressing song ever: “I Can Never Go Home Anymore.” When me and my boyfriend finished, I used to listen to that song on repeat just sitting on my kitchen floor with a bottle of Jack Daniels. I’d pass out, wake up and do it again. My flatmate used to come in, leave bags of KFC and just leave. She’d be like, ‘There’s your dinner, I’m going out.’ It’s the saddest song in the world.”


Here is the story in full, as spoken and sung by Mary Weiss (backing vocals in italics), delivered with all the tragic honesty and teen-age heartbreak she could muster:

I'm gonna hide, if she don’t leave me alone, I’m gonna run away…

Cause you can never go home anymore…

Listen… Does this sound familiar?

You wake up every morning, go to school every day,
Spend your nights on the corner, just passing time away.
Your life is so lonely, like a child without a toy.
Then, a miracle: a boy!

Now my mom is a good mom and she loves me with all her heart,
But she said I was too young to be in love, the boy and I would have to part.
And no matter how I ranted and raved, I screamed, I pleaded, I cried…
She told me it was not really love but only my girlish pride.

Now if that’s happened to you, don’t let this:

I packed my clothes and left home that night.
Though she begged me to stay, I was sure I was right.
And you know something funny? I forgot that boy right away.
Instead, I remember being tucked in bed and hearing my mama say:

And you can never go home anymore…

No, I can never go home anymore

Do you ever get that feeling you want to kiss and hug her?
Do it now—tell her you love her. Don’t do to your mom what I did to mine.
She grew so lonely in the end, the angels picked her for their friend. (never)
And I can never go home (never) anymore…


Listen… Don’t take my word for it.

Here is the best audio version that I could find on YouTube:

In exception to the usual drivel, it is definitely worth the time to click through to the YouTube site and read the comments.

We haven’t heard the last of The Shangri-las, not by a long shot.

When "Remember(Walkin' in the Sand) came out I was a thirteen year old who walked the beaches of the Delaware Bay all summer. I am pretty sure I was completely in love with these women even though they were a few years older than me. Didn't realize they were as influential as they were.

I had a copy of Remember (Walking in the Sand) as a teen, I was captivated by the almost cinematic quality of the record, to say nothing of its eroticism: