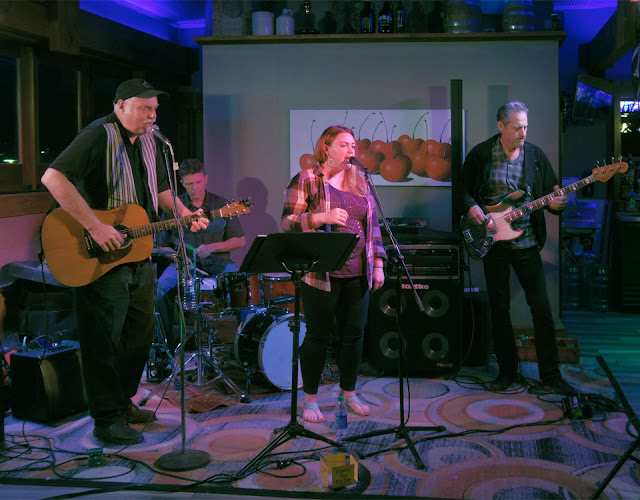 The crowd at the tavern got bigger and younger each on succeeding night of the weekend gig. The word had gotten out that there was a band doing a variety of music, with a woman belting out soulful covers of Aretha and Dusty and a whole lot of other singers. The final night started out with a couple getting engaged, lots of shrieking and laughter.  A group of four (or was it five?) young women really started to get into it by the third set; Wilson Pickett’s Don’t Let the Green Grass Fool You would have blown the lid off the place, except that they were already on an open air patio. The next song took them to a higher level, expressing themselves in a rapturous group movement. It captured the gestalt of their lives; this was their moment: the dance of the maidens, a genetic memory of a Sapphic sisterhood re-awakened:


Well sometimes I go out by myself
And I look across the water
And I think of all the things, what you're doing
And in my head I paint a picture
'Cause since I've come on home,
Well my body's been a mess
And I've missed your ginger hair
And the way you like to dress
Won't you come on over
Stop making a fool out of me
Why don't you come on over Valerie?

And even the regulars at the bar could pick up on the vibe.

"Valerie" lyrics by the Zutons

Too bad Amy Winehouse never came here to sing it.