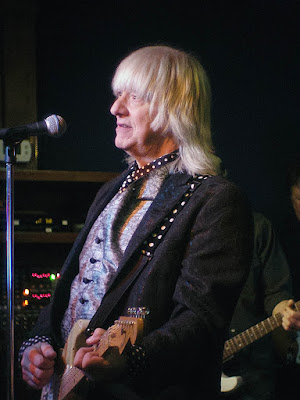 I'm becoming quite the bar-hopper in my dotage. Wednesday night I caught a performance by one of Curtiss A’s ensembles. I had seen him perform last August at the Minnesota State Fair in a Hank Williams tribute. This time, he was fine-tuning his John Lennon Tribute show, now in its 38th iteration!

I've seen him on several occasions over the years, even in his early punk-pop incarnation
as the "Dean O’ Scream” in the legendary Longhorn.  In a way, he is sort of an ADD version of John Lennon, not as focused, but certainly as intense. He's flirted with success, but has never broken into the big time. He has had health issues, its appears as if a record of every gig in his long career seems to be carved into into his rugged visage. He is now a “grand old man” of the Twin Cities music scene, with no shortage of musicians who want to be part of his latest project. Wednesday night’s Beatle songs were done with plenty of gusto, although having four guitars playing the same chords in the same positions might have sounded better in a more open arrangement. That quibble aside, the crowd certainly dug it, IT’S THE BEATLES, FOR CHRISTSSAKE!

And you aren’t going to find a better performance in a neighborhood bar anywhere!

It's good to hear that he is even still alive. Quite the icon, he is.