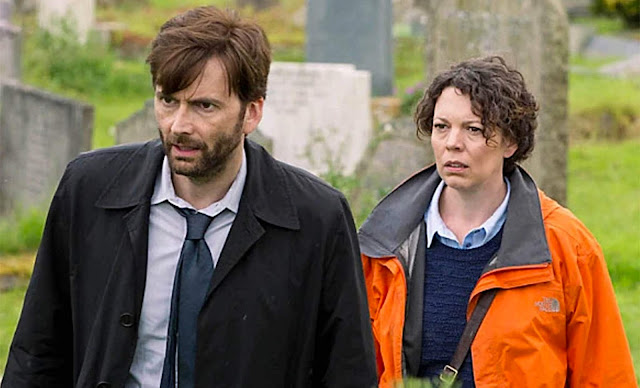 Broadchurch is an independent UK television mini-series (written by Chris Chibnall) that was made from 2014-2017. It stars David Tennant (as Alec Hardy) and Olivia Colman (as Ellie Miller), two detective inspectors who are thrown together by circumstance when a teen aged boy is found dead on a beach in a small resort town on the south coast of England. As the series progresses the impact of the murder spreads throughout the town; almost no one is spared real anguish. DS Hardy has a back story that shows up as well—he was the lead investigator in a murder/missing person case (in another town), a case that collapsed causing him to be labelled “the worst cop in Britain” by a tabloid. As a police procedural Broadchurch is nothing special; as a drama it is superlative.

Both leads are wonderful actors; the characters they portray are deeply flawed individuals who happen to dislike each other yet manage to hold a mutual sense of respect, albeit grudging. The whole cast is superb, making even the shakiest dialog ring true. The real kicker in this collaboration, however, is the soundtrack by the Icelandic composer Ólafur Árnalds who I was fortunate to see perform at the 2018 Iceland Airwaves. His minimalist classical/electronica music isn’t the most dynamic to hear performed in a concert setting but, when used in a soundtrack, is mesmerizing.

I’m still watching season three—it hasn’t diminished in quality—so I don’t know how it turns out yet. My blog-pal DJ Cousin Mary recommended Broadchurch to me for the soundtrack (thanks Mary!) and it has exceeded my expectations in all aspects.

Really delighted that you took my suggestion to watch this fine series. Since finishing the season 3, I miss Hardy and Miller and all the townspeople of Broadchurch. I thought the music was particularly appropriate because it is beautiful and sad, just like the story and its setting.

I’m a little sad that its over as well. Crime story aside, it was a fascinating study of interpersonal dynamics.