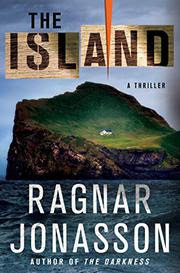 A thriller by
Ragnar Jónasson
Translated by Victoria Cribb
Minotaur, 2019

Although this is the second of Jónasson’s “Hulda” novels, it is set before the first one. In 1997, ten years after the death of Katla, a young woman who was found dead at her family’s summer cabin, a group of her friends gather at an isolated hunting lodge on one of the smaller Westman islands off the south coast of Iceland in memory of her. When one of them ends up dead Hulda is brought in and this new death is tied to the old one, including its botched handling by the police.

There is a fair amount of atmosphere (including a trip around Hvalfjarðavegur that I got a personal kick out of) and Ragnar never lets the reader forget where the story is taking place but it isn’t really a “thriller.” It is more of a police procedural. The writing (and translation) is good, but prosaic, this isn’t great literature. The set-up and finale are handled well, but the plot developments are workmanlike.

A good effort but I enjoyed The Darkness, his previous Hulda book, more.