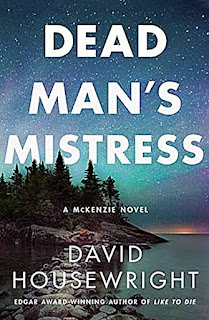 David Housewright is a member of what I call the “Minnesota Mafia” of mystery writers. It’s a group that includes, among others, Brian Freeman, John Sandford, Ellen Hart, and Chuck Logan. I’ve read several of Housewright’s other novels and they are all breezy and engaging.

Rushmore McKenzie is an ex-St. Paul-cop who came into a small fortune about ten years prior when he helped recover proceeds from a major heist. There is an undercurrent of resentment from his old police buddies because of this, but he manages to help them and they, in turn, help him. He divides his time between his dishy and competent girlfriend Nina (who runs a jazz club) and, invariably, other dishy and competent women who find themselves in need of a discreet amateur private eye. While he appreciates these ladies (and their attention), he remains faithful to Nina.

This particular title stands out from his others in that it mostly takes place along the North Shore of Lake Superior and, in particular, Grand Marais. I’ve visited and written about GM, so I had more than a little trepidation as I began to read. One problem with location-specific novels is that if you are familiar with the area any incongruities will stick out and take you out of your suspension of disbelief. Fortunately, this was not the case here—every Minnesota detail rang true, and even the somewhat implausible plot (concerning stolen paintings of a local Andrew Wyeth-like artist and his muse) didn’t get in the way. There is a big climax at an auction set in a “free port” in Quebec that was a bit out sync with the rest of the book. I also found the ending to be something of a letdown. Still, you could do worse for a Minnesota mystery and the local references are fun—although I suspect that they might not mean much to a non-native.

A fictionalized version of Betsey Bowen's studio is a major part of the plot.