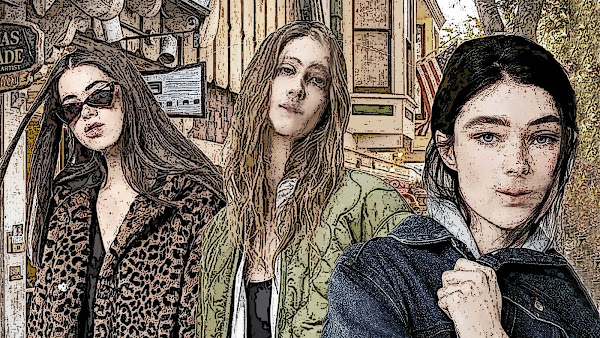 Early evening. The scene opens with a scowling old man wandering the streets of a trendy tourist destination on the California coast. He is a man on a mission.

Standing on a corner, three wyrd sisters see the old man approach, side-eying him as he totters by.

The man senses a whiff of irreverence from the trio as he continues on.

Finding an upscale restaurant he goes in and, after suitable deliberation, orders a very expensive dinner to go.

The old man steps out and ambles down the street toward the beach, idly exploring the town which is lit a rosy red from the setting sun. After a suitable length of time, he returns to the restaurant and picks up his order. The man begins to head back to his car and again encounters the trio of the loitering young women. They are still in the same place; a “girl-gang” with an attitude that some might perceive as threatening. But the man is not troubled—for what harm could come from such heavenly creatures? So young, so adorable, clad in fashionable glad-rags and mischievous attitudes? His gait picks up, his posture improves, and a smile breaks his dour mien.

Suddenly, they turn in unison, they are looking right at him! The man’s thoughts began to race…

omg… such impossibly smooth skin… the magic in their eyes is spell-binding… everything wonderful and mysterious in the universe is in these three sirens… their presence disarms my defenses with the implied offering: ‘Join us! Our union will create the new Eden where our children will dwell in a utopia of infinite opportunity… ’

And then one of them, the boldest, steps forward and speaks:

“Where did you get that?”

“Just down the street, the Pana… Pana…”

And, with a tossing of curls, the women are off in pursuit of their dinner.

It had been years since a teenage girl had even acknowledged the old man’s existence, much less spoken to him. He smiles, grateful for the brief moment of grace, but then his expression of joy quickly fades and his dolorous expression returns.

The old man walks into the wings of the stage holding the lonely box of take-out food in his hands in front of him, as if it were an offering. After he departs there is the sound of a car door opening and closing and an engine starting, then the sound of tires on pavement.

The sun sets and the stage becomes dark.

Nice. A Stand alone or continuing story. Works either way.