This is a FITK re-post 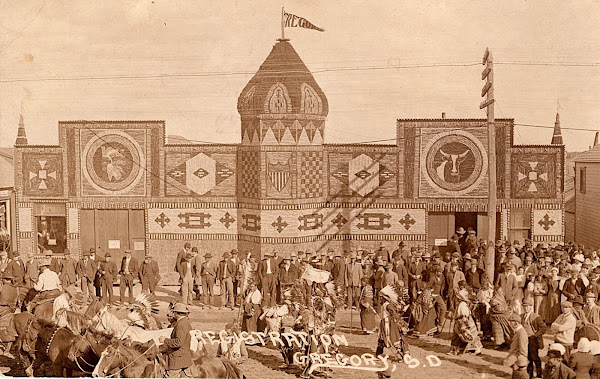 Today I printed and mounted a photographic show for the Mitchell, South Dakota, Corn Palace. The Corn Palace is an auditorium building that has the outside covered with mosaics of naturally colored corn, changed yearly to reflect a theme. Most of the pictures were made from copy negatives of old postcards. There were also three made from digital camera files. The building, excepting the mosaics, has not changed in over 80 years. There were several shots of the Palace that were dated in the twenties. On these pictures, these copies of old penny-postcards, you can see every detail of the building. You can count the bricks, the ears of corn. On the new pictures, shots of the same building, shot in the same location, you can see sort of a impression of brick-like blobs and, as the perspective recedes, just colored daubs. The corn looks like blurry confetti. That's some kind of Progress, I guess. I don't know what kind, just some kind.

I too have printed many photos of the Corn Palace. It is nice to know someone (not something) is doing my old job.

You know better than anyone I know that the last 20 years has brought photography to more people with increasingly easier access, and with increasingly less quality than ever before in the history of the medium. Seriously. Not even the introduction of the 35mm camera in the 30's or the color film of the 70's (combined with the “AE-1”) can meet with the devaluation of image quality heralded by the digital chapter.

You can rest easy at nigh knowing that there are silver loyalists like myself out there, exposing real film, and developing it in esoteric laboratories.

Sorry I just had to!

Yup - they killed it alright:

with their $85 ink cartridges, typewriter paper, and countless hours spent in the basement at their spyware-ridden computer, they all can say with triumph:

“See! I can do it myself - without having to take the film in!” Where once only a handful of images were lost due to someone's incompetence, now thousands of cherished pictures will vanish in a blink of an eye; I can hear the wailing now...

This post was written just before the "perfection" of digital photography, in 2006-2008.

Prior to that, the vast majority of digital cameras were, simply put, awful. Now you can get a camera that is better than any 35mm film camera for less than the price of ten rolls of film developed and printed. For snapshots your phone does better.

Commenters Dan and DJZ were my cohorts in the photofinishing biz.