In the town of Phillips, Wisconsin, is a masterpiece of Primitive Folk Art: Fred Smith’s Wisconsin Concrete Park. Over two hundred sculptures fashioned from concrete on wire mesh, adorned with shards of glass and other cast-offs, are situated in a pleasant park on the south side of this small town. Mr. Smith constructed these over a period of years in the 50s and 60s for reasons unknown (“I don't know why I make 'em”). Walking among the sculpture took me back not 50 but 50 THOUSAND years giving me the same feeling as when viewing prehistoric art. The impact of the work was strong, but its meaning was elusive. With Indians, Cowboys, Animals and Pioneers as subjects, you could sense what was important to Fred in his life. But to see this many of these grotesque tableaux, in such a rigid style, is almost too much.

I thought of my own attempts at “art” and that of classical Greek sculpture and other art movements. Every artist is trying to state something, trying to externalize a perception of existence and make it into a physical reality. Fred succeeded, to a degree. But there is just enough mystery in these figures to give them an added dimension of spiritual resonance, of totem-ism, as if they were keys to the doors to the primordial subconscious. 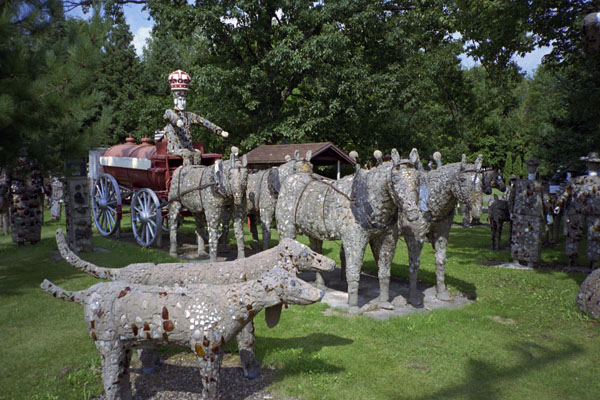