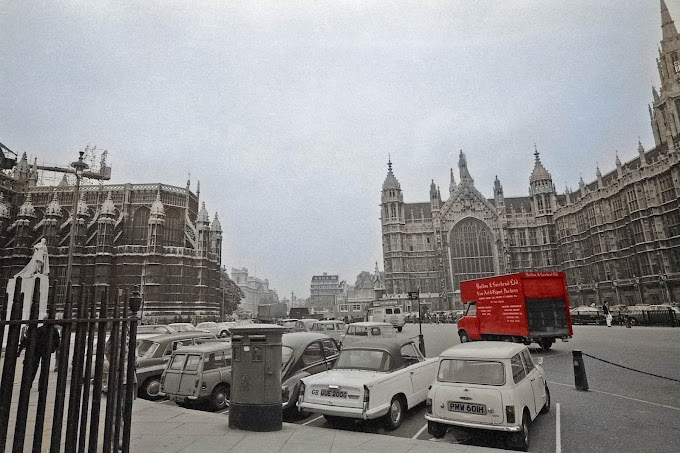 In the fifties and most of the sixties, air travel was the province of the well-to-do, with airfares quite high (even compared to today’s prices) but toward the end of that era new regulations and the rise of low-cost charter flights changed that scene.

So, in the summer of ’73 I found myself waiting to board a round-trip flight to London for the grand total of $168. I had a traveling companion; neither of us had any experience abroad. We waited. And waited. The 7 P.M departure time departed. The new departure time of 11 P.M. departed. As well as the 1 A.M. mark. Finally at 3 A.M. we boarded, flew into the rising sun, arriving in Gatwick by late-afternoon. We took the train into London. It was getting late, we booked the only available B&B, “That’ll be the Rowan’s”, the clerk at the lodging placement centre said, with an arched eyebrow. We were so exhausted by then that we would have slept in St. James park.

We trundled (with luggage) about a mile, finally ending up in a somewhat shabby part of London and found the address. We went to the door and a grim looking woman answered. We explained our needs, and she agreed to let us a room: “Two night minimum, pay in advance.” We agreed and followed her to our ‘room’. When she opened the door, a disheveled drunken man raised his head off the bed. It was a brother-in-law who had just ‘dropped in’. She had another room, and we went in. This was really more of a prison cell - one high barred window, a bare hanging light bulb, no decorations, two small metal beds with a mattress(?) stuffed with wood shavings covered with a worn sheet and tattered blanket. Oh well, we thought, what are looks—we'll be sleeping anyway—and after using the W.C. (which really was a closet - about two foot square) we tried to sleep. This was when the choir of watch dogs in the square behind the house began their nightly concert. Then, from the other side of the door, we heard a young girl screaming “Don’t let him touch me! Don't let him get me!” The landlady's daughter was being molested by her ‘funny uncle’!

Amid this cacophony, we finally, after 36 hours awake, managed to drop off to sleep. We woke early, about 5 A.M. and quickly decided that ANYTHING was better that this. We quietly left without breakfast.

Later that afternoon we actually found a very nice hotel in South Kensington, and spent several days there—that place was really quite civilized. Since that time, I have spent many nights in B&B's and guesthouses and have found them to be wonderful experiences (The Paradise House in Bath is aptly named). But my aspiration of becoming a World Traveler was almost nipped in the bud by THE B & B FROM HELL!

Thank you for obliging me with this story Batty. I think I stayed a sleepless night at one of Rowans chain lodgings in Mexico. The name of the establishments neon letters were all burned out cept the s. Coincidence maybe, but I bet it was the same place.