“Which animal would you like to see the most?”

The Weaver and I had an invite to get a behind-the-scenes tour of the Honolulu Zoo, a dear friend of mine is a zookeeper. Upon hearing my corny remark, she did a little double-take, and then flashed that laughing smile for an instant, that smile I remembered so well from the days we worked together. We went with her and met a pair of friendly elephants, the world’s fourth oldest hippopotamus, a trio of frisky giraffes and a pair of curious zebras. All the animals (except the cranky hippo) seemed to love her. Then she called out “Krueger, Krueger, come here boy… ” A 5000 pound white rhinoceros came trotting up, like an obedient dog. She stroked his snout, talked softly to him, and fed apples into his soft, gaping maw. I fed him too, his wary brown eye giving me a once over before accepting my offerings. (Please note: we had a MASSIVE steel fence separating us.)

A rhino is a dangerous wild animal, with a reputation of having a bad temper. But this one had a gentler side, an obvious intelligence and a friend named Kim. 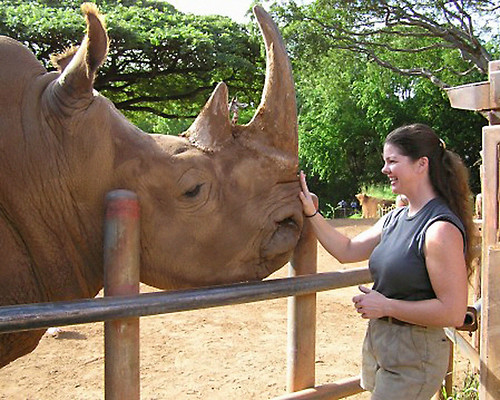 Yes, all the animals love Kim.
I am jealous of you, happy for her and yes, a little sad for me.

I am glad you got to see her and I am happy that she is living a much better life than MN was offering her.

Kim the zookeeper. It seems so right.

That is so amazing - rhinos are so kind, primitive, and cool animals. Someday I would love to work in Africa and contribute to helping them when I'm older.
The only thing wrong with this article is you stated that rhinos have "bad tempers". They don't!!!!!
Rhinos have excellent sense of smell and hearing, but poor eyesight; it gets scared easily if it hears an unfamiliar noise or smells a strange scent, and sometimes charges at it. It may or may not charge; that makes them unpredictable, but the stereotyped word "bad tempered" is a bad choice to describe the rhinoceros. There is no such thing as a bad tempered animal - only if raised in a cruel manner.
Rhinos aren't mean - they are timid, shy, and quiet. But if startled or provoked, they may charge to PROTECT themselves. Please keep that in mind. Thank you! :)

Anonymous ~ please read the post again. I said they have a reputation for bad tempers, all the rhinos I've met (one) have been sweethearts!