Riding In Cars With Boys - II 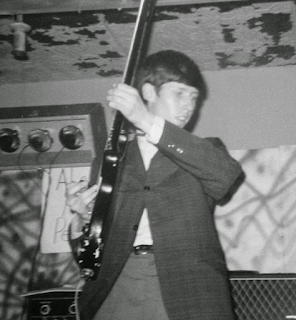 Our rock 'n roll combo The Others had finagled a ‘gig’ in a western Wisconsin town that had a youth center which featured weekend dances.

Dan had by this time purchased a 1958 Plymouth SEDAN, still plenty big and, with his newly re-instated license, was eager to put his youthful road mishaps behind him.So, we were off to Ladysmith, Wisconsin with our gear in the trunk and our spirits high! When we arrived at our lodgings (a very nice ranch house in the country) we were greeted by the proprietor of the the youth center. We rode horses, acted cool, and ate with the family; by far the best accommodations I would ever have on a band gig. That night we played with as much professionalism and bravado as our 17 year old egos could muster. We did alright (understand that in those days a successful performance was one in which no fights broke out.)

Afterwards, with Dan at the wheel, we headed back to the ranch. Dan was hungry, so he reached over to a get an apple from a bag on the front seat. At the breakneck speed of 5 miles per hour his stretch caused the steering wheel to move just enough to cause the Plymouth to crash into the rear end of a parked car.

Although we didn’t realize it at the time, that was the end of that band. But the car wasn’t a total wreck. The next day, after hitching the front end to a tree and putting the car in reverse, we managed to pull the radiator away from the fan enough to let us be able to drive it home. In the car, Dan began to sing old barbershop quartet songs (ie: Down By The Old Millstream, etc.) and we all joined in(!?)

Dan lost his license again, but he used the time to save up enough money to buy a good car. (To be continued… )