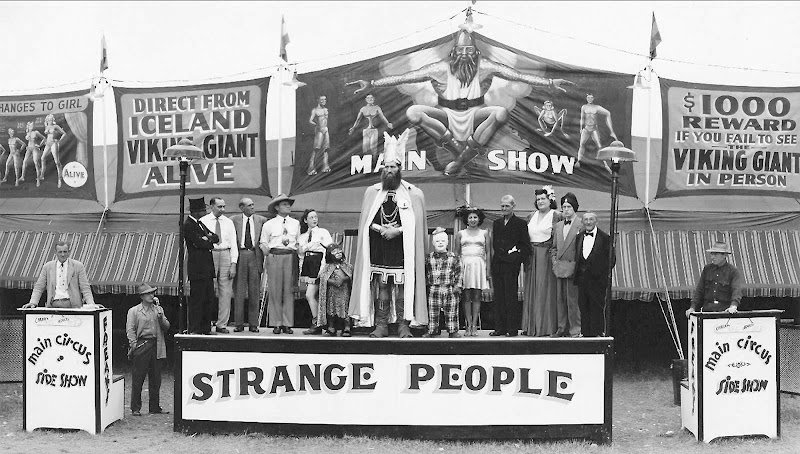 Not in books, not on TV, but in the flesh. My juvenile mind had already been primed by the outlandish Journey to the Center of the Earth (both the book and the movie) and exotic scenes depicted on Ísland postage stamps. It was in the early sixties, at the Minnesota State Fair and, for some reason, my parents thought I was old enough to have some money and be allowed to experience the Midway area by myself. There were rides and games of ‘skill’ but the things that most intrigued me there were the sideshows: motorcycle racers going around in a giant wooden barrel, Lash LaRue and his amazing whip, Harlem In Havana, with its attractive ‘ebony’ dancers, and the freaks. I also saw the Siamese twins, boys younger than me, conjoined at the waist, in their sad little trailer with a collection of toys, and a TV tuned to afternoon soap operas, the “fattest family alive” which nowadays could be reproduced in almost any city, and the odd animals- some embryonic, others walking around with an extra limb or two.

But the headliner, the act with the biggest painting on the canvas in front of the tent, was ‘The Viking Giant’, from the land of fire and ice- Iceland. Of course I had to see him. He did not disappoint. Billed as 8 feet 8 inches (probably somewhat shorter in real life, but somewhat taller in his high boots and tall cap) he was the biggest man I have ever seen. I shook his hand, I bought a souvenir ring, (a prized possession for many years) and was generally awestruck. His movements were slow, deliberate, so as not to squish any of us little imps who swarmed around him. I was impressed, even then, by his reserved demeanor in such a strange setting. His anglicized name was Johann Petursson and he was also known as Jóhann Svarfdælingur. He was active in the U.S. until the 1980s (including a cameo in the movie Carny) and then returned to Iceland where he died in 1984.

An indelible first impression and perhaps the seed of a life-long fascination with ‘The Rock’ and its people. 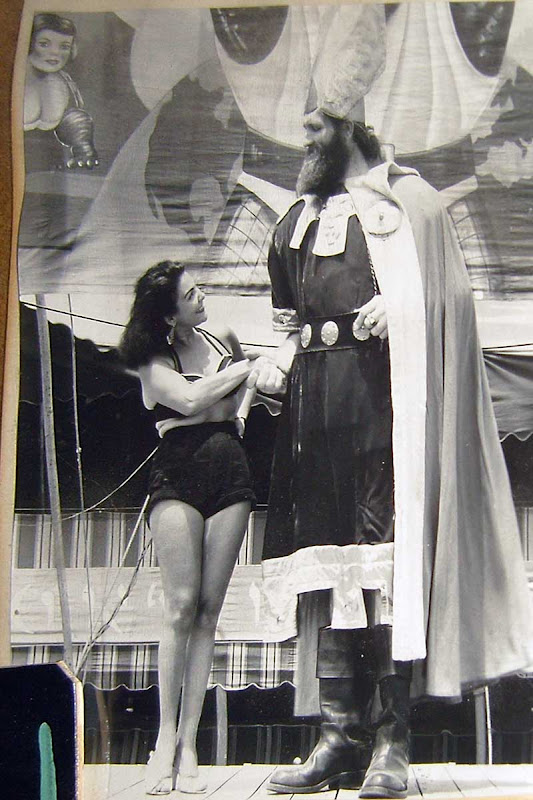 You need to read "Geek Love" by Katherine Dunn. Wonderful fiction about carny life. Also if you use the Oseola bridge landing on the St. Croix, you can paddle your new craft through less inhabited land.

Wow, you actually met Jóhann Svarfdælingur in the flesh? That is so cool. He lead a rather interesting life. There is a museum in his name somewhere here in Iceland.

Not connected, but Jóhann Pétursson was also the name of my grandfather, which is why one of my sons carries the name Jóhann Pétur.

...I've been to the Jóhann museum where a collection of his personal belongings as well as his furniture is housed. His size is hard to grasp...his ring is big enough for my to put my whole arm through, his chair I'd have to literally climb into. It's a small, intimate museum just north of Akureyri in Dalvík and it's definitely worth the trip!