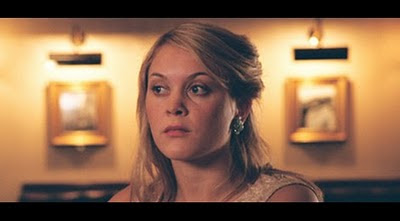 Saw an Icelandic double feature last night- Dís and Cold Light (Kaldaljos), not an easy thing to do in this part of the world. The Icelandic film festival comes through about once a year, I have to make sure to catch them while I can (or else invest in a PAL video player!)

The subject of Dís was a twenty-three year old Icelandic woman with an existential crisis. Is it my imagination, or I have been focusing a lot of my attention on that socio-ethnic-gender group lately? It was fun to to get a taste of some of the cultural interactions from the “other side.” It was also nice to see the interior shots of the Hotel Borg. There is a cameo by Vigdís Finnbogadóttir, Iceland's first female president. Lots of attractive scenery, both urban and rural, and an excellent score from Jóhann Jóhannsson makes this slight film enjoyable. The woman who wrote and directed the film, Silja Hauksdóttir, actually was a receptionist at the Hotel Borg right about the time I stayed there! Cold Light concerned itself with an artist, Grímur, who could foretell the future with his drawings, and switched between his adult life and troubling childhood memories. Very dark at times, and most thought-provoking. Hilmar Oddson’s film has a lot of the grim, gray scenery that doesn't usually make it into the travel brochures, yet is just as much a part of Iceland.

Both films are well worth a look.