One thousand meters, that is. I recently realized that I had spent eight days In Iceland within a thousand meter radius of my apartment. A very small world, to say the least. Waking to the sound of the Cathedral's bell, going out at night to the venues of the Airwaves festival, shopping, and even swimming at the outdoor pool, all within 1000 meters. While shopping, I had picked up some books at Máls og Menningar, mostly Halldór Laxness titles which were not distributed in the USA. When I returned home I started reading The Fish Can Sing (Brekkukotsannáll) and on the first page I found a small map: 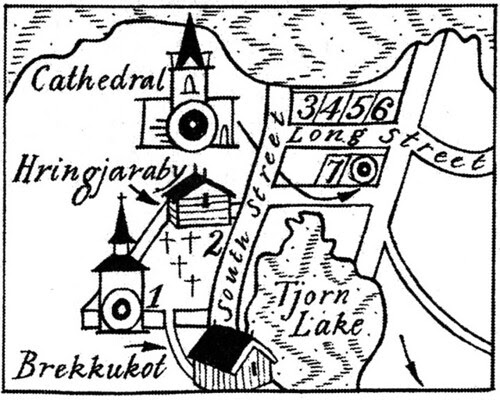 This map was of nearly the exact same area that I had inhabited during my stay. The story concerned itself with young Álfgrímur, an orphan, and his coming of age living on the small farm "Brekkukot" some time around the start of the 20th century. This book is a work of fiction, of course, but the locale of the story's action could not have been any closer to my own explorations if I had mapped it myself. After the Airwaves festival was over, I had spent a few more days in town, much of that time photographing various neighborhoods (within 1000 meters of my apartment, naturally.) One night I shot this view of the old graveyard on Suðurgta (South Street on the map): 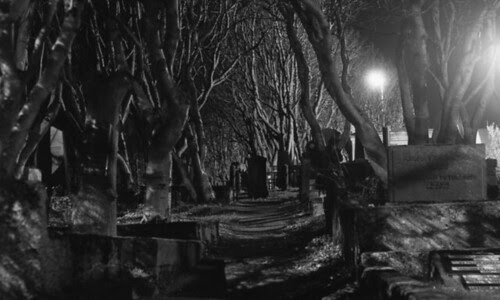 According to the book's map, the hut Hringjaraby (where a crucial scene took place), would have been right at the center of my picture.

my parents stayed at the same guesthouse you did, and they also spent a large part of their visit in the same tight circle as you did. I also love that cemetery, and have taken lots of photos in there, although the mood of mine is decidedly different from yours.

Seeing that photo makes me want to howl.

I don't think I could spend a week confined to 1k unless I was imprisoned.

I really, really, really Love that photo of the graveyard! It looks spooky and dark and.. well it just makes your imagination go overdrive. :D

Now I'd like to ask, if I could use it on a webpage?
I'd give you full credit of the photo! And link back to your blog also, so people will find the original. :)
and if you'd like, I could show you the outcome when it's ready. ^-^

You certainly can! I'm looking forward to seeing your post!

There we go!
Thank you for letting me use it!<3 ^-^
Looks marvelous!

Looks like it was shot with your intent in mind! If you are ever in Reykjavík, be sure to visit the graveyard on the hill above the pond.

I sure will!
Thank you once again!