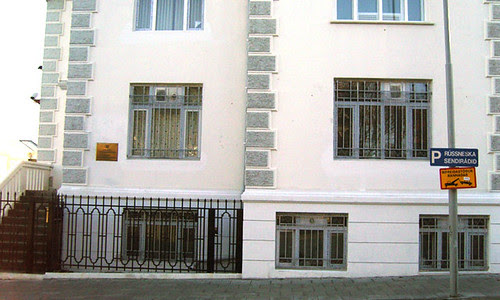 Just down the street from the apartment I had during my stay in Reykjavík is the Russian Embassy. Being the running-dog lackey of Yankee imperialists that I am, it was my duty to conduct a clandestine surveillance of activity therein. Here is my report:

The facility appears to be a bee-hive of activity. A mysterious pipe extends from the attic, emitting an irregular "brap-brap-brap" disturbing the peace on Garðastræti. A diesel-powered document shredder? Or a cold-war confession-extractor? There were men on the sidewalk throughout the day, once a van pulled up and a swarthy "agent" unloaded black-market items: Cigarettes, beer and packages that could contain secrets, or chocolates, or nylons, perhaps? The yard adjacent to the Embassy was filled with steel I-beams, one day I saw babushka-wearing matrons priming these girders. Another afternoon I saw a man carry some white, square cardboard containers out the rear entrance- microfilm , perhaps? (or maybe just pizza boxes- he placed them in the trash bin...)

One night, as I headed down the hill into the center of town, one of the basement windows (visible in the photo above) was open, and I could hear voices in animated conversation; through the semi-sheer draperies I could see that a dinner party was taking place, with wine, beer and what smelled like delicious food. When I returned, several hours later, the lights had been dimmed and a stereo played emotional Russian music, there may have been dancing...

As was my case, the Embassy staff were also strangers in this strange land, although they probably had fewer options than I did- most Icelanders speak excellent English, I imagine that not so many speak fluent Russian. Coming from one of the poorer countries in the world to one of the most expensive, I'm sure the people who lived there didn't have much in expendable income, a night on the town here is an expensive proposition by any standard. An Embassy and its grounds are considered native soil for its occupants; in it they did have their Russian food and drink, and their Russian music; they were making their few thousand square meters a home away from home.

A very late comment.
I remember the "spies" used to gather and eye each other at Hornid in Hafnarstraeti, over coffee and tasty morsels.
The russians always arrived wearing thick black coats and fur hats, the americans wore belted raincoats with the collars turned up, and often wore dark glasses.
It made for pretty good theatre when they were in together, sometimes nodding acknowledgement, other times glaring at each other.
We assume each group took it in turns to tail the other around town.

No problem, the posts here aren't time-sensitive! I've had a meal myself in Hornið, in March of 2000.
As you can probably tell, I've got a thing for Iceland...