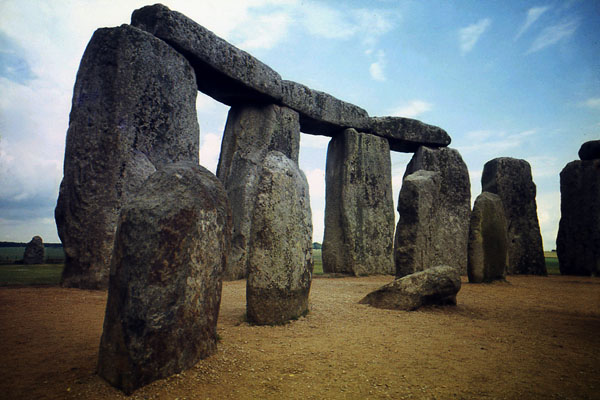 The mysteries of antiquity are myriad. Only a few on earth remain visible, exposed to the elements. At one time Stonehenge, on the Salisbury plain in South-Central England, was open to all, so any intrepid scholar-seeker-tourist could walk among the monoliths, stroking them in the same fashion as the ape-men in 2001, A Space Odyssey (aping the apes?), receive "vibrations" or take close-up photos. Being young and impressionable, I made the pilgrimage in 1973. I had read the current crop of popular metaphysical books, I was intrigued by Casteneda's Don Juan, I studied "Lay Lines" superimposed upon British Ordnance maps. Of all that "New Age" bluster and hokum, this site alone has made a lasting impression on me. It is, ultimately, unknowable in its entirety. But it is real. It represents more than just an arrangement of shaped rocks. It was not only a cultural artifact of an extinct civilization, but it was arguably the pinnacle of that society. To walk among the stones gave me a thrill, it was almost as if the ancients were present, whispering their secret knowledge in my ear.

I returned twenty-two years later, with family in tow, and although the monument was still there, the nearest one could approach was about 30 meters. I heard voices that day as well, but they were from the hundreds of tourists all around me. The boys enjoyed it, however, and the Stonehenge T-shirts they got there were worn proudly for years.

Real shame about that. You used to be able to walk right into the centre.

There's always the option of watching the sunrise on the Midsummer Solstice. They let people waddle amongst the stones for one day of the year, and it's like Woodstock, only less Wood.

Why not one more time?

... I'd opt for Björk at the Glastonbury festival...

I visited Stonehenge in September of 1976. I was USAF, stationed in (West)Berlin, back when where you were in Berlin was a good deal more important than it is now. I took two weeks leave, bought a Britrail pass (2nd class) and the three of us (me, myself, and I) wandered at will through England and Scotland, no reservations, staying at B&B's. It was amazing. You could still walk amoung the stones then, and touch them. It had been raining and the stones were damp-cold. For the better part of a morning, I walked among them, touched them, leaned my face and body against them, listened to them. The stones hummed. A very low, deep, organ-pipe note just at the lowest verge of hearing. I can still hear it. Of that whole magical time, two places stand out in my mind: Stonehenge and Tintagel with its yellowed grass, dark rocks, dark blue sea, and the quality of the light there that was so like winter sunlight here in the flatlands of north Texas.

I'm a year older than you. Björk is amazing. sjg:o))