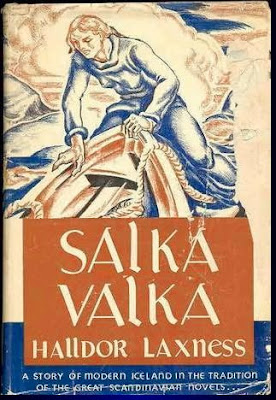 I have previously alluded to a third party in my mini-vacation, Icelandic readers will know her already: Salka Valka, the titular protagonist of the novel by Halldór Laxness, whose story filled my spare moments in our weekend cabin. This book is somewhat obscure in the USA (look for it fetching a premium on Amazon.) It was originally published in Iceland in two parts (Þú vínviður hreini and Fuglinnn í fjörunni) in the early thirties where it created a sensation in the Scandinavian countries. It was published in England in 1936 (translated from the Danish: last printing 1964.) This is one of Laxness's earlier works, written just before Independent People and covering some of the same territory, but focusing on life in a fishing village rather than on a sheep-farm. The scene is set on the first page:

"When one goes by boat along these coasts on these freezing mid-winter nights, one can't help thinking that there can hardly be anything in the whole wide world so tiny and insignificant as a little town like that, glued to the foot of such immense mountains. God knows how people live in such a place! And God knows how they die! What can they say to each other of a morning when they wake? How do they look at one another of a Sunday? And how does the parson feel when he gets into the pulpit at Christmas and Easter? I don't mean what does he say, but, honestly, what can he think? Must he not see that nothing here matters a bit? And what does the merchant's daughter think about when she goes to bed of an evening? Indeed, what kind of joys and what kind of sorrows can there be around those dim little oil lamps?"

This is a novel about fish. And love. And, surprisingly, gender and feminism. Salka is an unlikely heroine, homely, coarse and ignorant; but not stupid. She is in possession of a vitality which cannot be defeated. Salka's struggle to find her place in a hostile world—a fickle mother, faithless lovers and lack of close friends—is the common thread woven throughout the work. The book has a complicated mix of sub-themes: illegitimacy, incest, class, domestic abuse, infant mortality, hypocrisy, poverty, Socialism, Capitalism, and Christianity. As a novel of Social Realism, it can be ranked with the finest of Dickens, or even Zola's Germinal. Sprinkled throughout is Icelandic folk wisdom, dark humor, fatalism and a strong sense of the absurd. A tremendous book—certainly worthy of a new translation—but considering that Laxness's great Iceland's Bell wasn't translated into English at all until 2003, English readers may have to wait a while for the proper return of Salka Valka, or else trouble themselves to learn Icelandic! *

I'll end with a final excerpt from the book, this one concerning love and fish:

"Aren't we to talk about love at all at this time?" he asked. "I must go out and dry fish," she said.

*UPDATE: A new translation of Salka Valka (by Philip Roughton) will be out in May of 2022!

More on Halldór Laxness at Laxness in Translation

I'm afraid I'll have to read this book (having read your sermon).

... not that I had intended for you to translate it properly (although I suspect you could do a better job), but I certainly had your "gender studies" in mind when writing this post...

I'm ready to borrow a copy from the College of William and Mary, once I finish my present endeavor. Thanks for the review!

... it's pretty good Laxness, with probably his most fully developed female character...