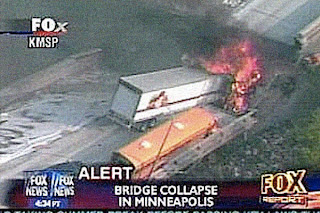 Every parent's worst nightmare, played out on TV. The I-35 Interstate Highway bridge over the Mississippi River in Minneapolis collapsed last night, throwing 50 cars into the water from a height of 64 feet, as it suddenly self-destructed during rush hour. The children on the school bus were all rescued, but there have been reports of six fatalities, with dozens of injured. There will certainly be more deaths as the recovery efforts continue. 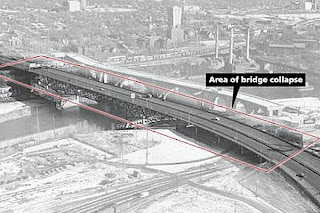 This is a big bridge, in the center of Minneapolis, with over 150,000 cars using it every day. The implications of this event will be profound. Until engineering reports come in, it is hard to say exactly what went wrong, but it was definitely some sort of structural failure.

The bigger failure is in the transportation system, a system that has been starved for funds for years, with an administration proud of its attempts to short-change the State of Minnesota. There has been talk of raising the gas tax. In Minnesota, it is a fixed tax, not a percentage. It hasn't been adjusted in twenty years, with the result that it is actually near the lowest percentage of all time. The position of State Commissioner of Transportation is currently a part-time job, held by the lieutenant governor.

You get what you pay for.

UPDATE: Some further thoughts on this from an expert.

Pleased to see you were not on the bridge.

Very sad and shocking. Reminds me of a scary movie i once saw. Gave me nightmares. Mothman.

Well, you know what I always say, that people ain't no good - this only goes to prove it. That's my pessimist view.

We literally woke up to this news on radio this morning. Talk about rude awakening. I'm just baffled that these kind of things are allowed to happen in a relatively civilized country.

Shades of Virginia Tech--everyone calling friends and relatives to make sure that they ere all right. Glad to hear that you and your family escaped this tragedy. Raising public awareness about the issues is all you can do, and you're doing it...

The price of a movie, is what I paid not to be on that bridge yesterday. The kids and I were to absorb some culture down at the Art Institute, but settled for pop culture at the movies instead. The Simpsons saved us.

... I didn't really watch Fox, I stole the image from a newspaper web site...