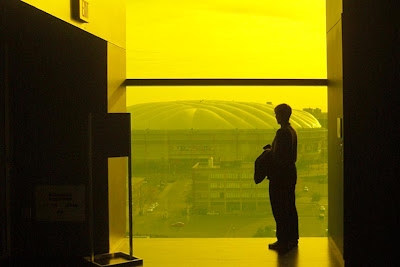 We went to the Guthrie Theater Sunday to see an adaptation of Jane Eyre. I'm still wondering about that place; the lobby areas are striking but not inviting, it's as if one were in a bad French movie from the early seventies, which sort of makes sense when you consider that that's where and when the architect Jean Nouvel came of age. Some parts of his building are just plain creepy. As we settled in to our seats who should arrive, in the very same row, but Jan, Joi and Cindy Lou, women with whom I used to hang many years ago. I received a little razzing for being the only guy there (I wasn't really) and they called me by my old nickname: Alice. I was one of the girls again, sort of.

When we were younger, we were all trying find mates; trying, as Jane Eyre did, to reconcile our desires with our realities. None of us got an inheritance, but we all managed to find someone (if not the on the first try, then the second...) compatible with our ideas about marriage. Jane Eyre was a favorite book of these girls; the plot is a bit melodramatic but the message of "To one's own heart be true" remains as valid as ever.

Some parts of the seventies were just plain creepy.

Weird coincidence. Our student book club just selected Jane Eyre (along with Flowers for Algernon) for the first book discussion this year. I'm "re-reading" it by listening to the Librivox version...