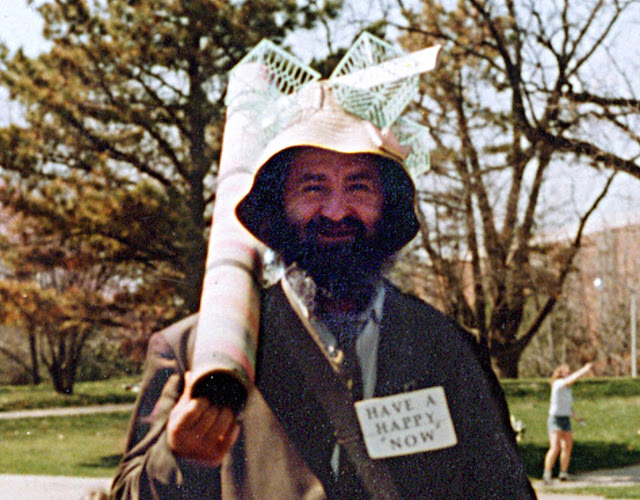 Mike Belchak was a regular presence in Minneapolis in the early 70s, a raggedly dressed fellow who walked about downtown and the University of Minnesota pulling a wagon covered with posters exhorting the virtues of living the simple life and being in harmony with nature and one’s fellow man. He handed out crudely printed little pamphlets by “Ernest Free Mann” with similar messages. Mike would be in the local paper from time to time when the police would pick him up, usually at the urging of local businesses who resented having an anarchist in front of their stores. The police didn’t really care about Mike and let him go right away; despite his appearance they knew he was truly a gentle soul. He would make an annual appearance at the May Day celebrations, once wearing a multi-colored gown fashioned from thousands of gum wrappers he had scavenged and linked together like medieval chain mail. He slept in the back of a laundromat, or so I heard, as sort of a caretaker/watchman. Eventually the business closed, and Mike went back to Illinois, where his mother lived.

Some years years later there was a short article in the paper about his death: he had been hit by a car while riding his bicycle. Other than this photo, I couldn’t find any trace of him on the internet, nor was he in any of my photo archives. True to his principles to the end, he lived the simple life, left no trace, and returned to the earth.

But it's a great picture.