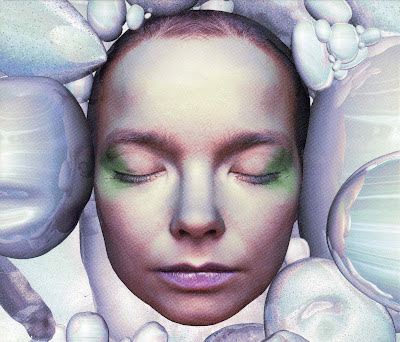 Presented strictly from the criteria of my own personal enjoyment. These are for the performances, not necessarily for the songs themselves. They are in a rough chronological order, earliest to latest, with no particular ranking:

Alfur Út Úr Hól- Recorded when she was 11 years old. Björk has disowned the album this is on, but there remains an eerie charm in hearing her child-voice sing "Fool on the Hill" in Icelandic, with her multi-tracked recorder parts dancing in the background. Joanna Newsom's voice is a twin to the young Björk's.

Motorcrash- with the Sugarcubes. This must be the craziest pop-music psychodrama ever, Björk sounds as if she's singing this while actually riding her bicycle, with sinister comments from Einar...

...I'll pass over Debut, if only because there's so much else to choose from and there are at least six I could put on the list from Post...

Hyper-ballad- I've written about this song before, she just nails the concept on this, as perfect a combination of lyric, arrangement and presentation as I've ever heard in a pop song...

I Miss You- is Björk with a Latin beat and a Dadaist lyric. She's done this live on her last tour, until that is available I'll settle for the CD version...

Isobel/Bachelorette- two songs that are virtually inseparable, Björk becoming Nature personified. "I'm a fountain of blood in the shape of a girl."
Really. Sjón and Björk make quite the songwriting team...

The Boho Dance- on A Tribute to Joni Mitchell, a stunning, challenging arrangement (Guy Sigsworth and Damien Taylor) showcases Björks nuanced, passionate interpretation. She really displays a deep understanding of Joni's lyric (and her own experiences) about "The Boho Dance."

Pagan Poetry- Just about as far into someone else's id as I dare go...

Who Is It?- The mix of this on the video (with bells) is the better version of this testament to joy.


Of course, it really is quite impossible to condense her career into ten songs, (what no Hunter?, no Venus as a Boy?, no Stigdu Mig?), but that's the fun of it. I'd love to hear what your favorites are, and why...

Human Behaviour. There is just something about the lyrics that rings true with me, plus the rhythm and crescendo of the drums. Best listened to turned up loud with the lights out, in your underwear...

... the lyric is from the point of view of an Aspie? I'm with you on the loudness and the dark, I'm having a little trouble with the underwear, however...

You're not the first bloke to have a trouble with underwear...