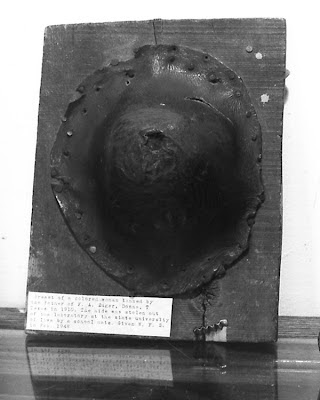 For some reason, perhaps influenced by numerous stories of atrocities in the media, I recently recalled a visit I had made in 1976 to a very strange museum which was located in Northfield, Minnesota. It was a private museum, located in an old brick house and its attached buildings. It had, in its yard, a dozen or more old train bells; inside it had several ornate music boxes. There were displays of pioneer tools, old clothes and a human breast. My memory is pretty good, but the thought of that display made me wonder if it it had ever really existed. A short search through the photo archives soon turned up the negative for this print:

Breast of a colored woman tanned by
the father of F. A. Zuger. Donns. T
Texas in 1910. The hide was stolen out
of the laboratory at the state university
of Iowa by a school mate. Given W. F. S.
in Feb. 1948

W.F.S. was probably W. F. Schilling, the founder of the museum, who was a civic leader in Northfield for many years. The museum closed soon after my visit, with significant items going to various historical societies, and the rest going to auction. The fate of this item is unknown to me.

In what kind of a state did I grow up? Thirty years before I was born a multiple lynching took place in Duluth, fifty-five years before that the largest mass execution in US history took place in Mankato, not far from the museum. This "artifact" was on display for years without controversy.

Our state is celebrating its 150th anniversary this year. Due to budget constraints the festivities will be modest; I remember the Centennial, it was quite the big deal.
The dark side of Minnesota's history won't be forgotten this time, although this tasteless incident will be. With war, torture and all the related atrocities stemming from the US invasion of Iraq with us on a daily basis, I wonder how far we've come, and how far we have yet remaining.

This is extremely disturbing. I sincerely wish that you had not chosen to post this. I understand that it is not your wish to perpetuate this, and that you seek to use this image constructively, but I find this deeply disrespectful.

To think that people would do that. But that's humankind for you, I guess. Capable of any evil there is, and just as capable of justifying it.

Man, that is CREEPY.

It would be disrespectful not to show how sick society was and can be. Had that been mine, I would want future generations to know how I had been viewed.

I am amazed that I found this picture on the web. This artifact was indeed in my grandfather's antique collection in the "Hobby House" in Northfield, MN. It was given to him by a professor from some small southern college, probably in the 1920's.

At one time W F Schilling's collection was the largest private collection in the US.

This artifact was never displayed and kept in a drawer in the back of the museum. The only reason it was shown to this professor was probably because he was a professor.

The bells mentions in the blog were actually 50 railroad bells from 50 different railroads throughout the US. They were on the 50 stars of a base to the statue of Liberty in his front yard.

Breast of a colored woman tanned by
the father of F. A. Zuger. Donns. T
Texas in 1910. The hide was stolen out
of the laboratory at the state university
of Iowa by a school mate. Given W. F. S.
in Feb. 1948

Professor Batty is probably correct in this statement. My uncle must have put it on display after my grandfather died in 1960.

This item aside, the museum was a fascinating place, full of odd things, with a refreshing lack of curating.

I never recall seeing a human breast nor hearing of one. Louis Schilling the so. Of W.F.Schilling was my grandfather.

Erica~ It wasn’t displayed prominently, if I didn’t have the picture I would have doubted my own memory of it.