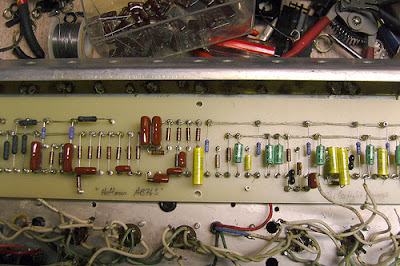 Existing in scattered bits and pieces for years, its entropy has finally started to reverse, now being re-assembled into the form of a Fender™ Deluxe Reverb amplifier. I had picked it up for a song; some misguided soul had tried to turn this beautiful tone machine into a snarling Marshall™ monster. All new components, better than the originals, but retaining the "iron" of the old unit- the transformers, chassis, tubes and switches; these things remain just about as good as they come. So let the winter winds blow, I'll ensconce myself in the basement: soldering, drilling, re-animating this artifact of the sixties, carefully putting each piece into its proper place until it sings again.

Crazy! There are those of us who have never seen the inside of an amp, and who couldn't have imagined that it might look like this! I'm glad you didn't make me guess...

... it will have more stuff than this when it is done but it should still look pretty neat- these circuits were perfected in the '50s and '60s and are still being made today!

Prof, You are just a cool dude, no doubt about it!

...and in your funny little ways, you remind me of my beloved grandfather...