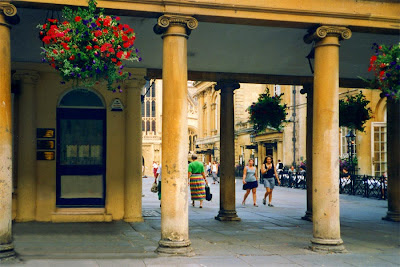 The hottest summer in British history found me in Bath, the home of the ancient Roman spa. Stall Street, lined with its stone faced buildings, is a resonant spot, the hum of traffic and the babble of tourists give it a lively air. In the summer, professional acappella singers perform in the evenings in the relatively sheltered area of Abbey's Gate, doing a mix of traditional and light classical fare. During the day, however, the amateurs busk, some better than others, some barely musicians at all, hoping for change or a pound coin placed in a battered guitar case. On that particular day there was one such performer who stood out from the others- a woman in tattered clothes, about thirty years of age, with three grimy children in tow. She had the look of one who had spent too much time in Paradise and now, now that she had returned to earth, found herself in purgatory. She sang only one song, in a piercing, raspy alto, never quite making it all the way through. Her children clustered near her, fear and sadness in their eyes, no youthful exuberance in their demeanor. The woman sung as if reproaching all who wandered down those reverberant streets: the prosperous, the tourists, business people, beautiful young women and handsome men, all of these she rebuked. The song was not an old song, and not British, but was one which I knew well:

This was another context for a Bob Dylan song, one where the original message had been turned a bit, it seemed forced and strange, I was not moved.

I do love that city, though.

... we stayed here when we were there (in 1995) absolutely gorgeous! Loved the town, which made this incident all the more disconcerting...

We were in Bath in 2004, another year of record heat! And, sadly, the year before a new spa opened where you can once again "take the waters!"