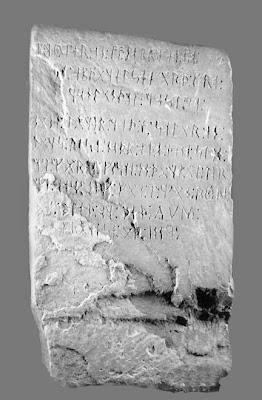 "8 Goths and 22 Northmen on an exploration journey from Vinland westward. We had camp by 2 skerries one day's journey north from this stone. We were out fishing one day. When we came home we found 10 men red with blood and dead. AVM save us from ill. We have 10 men by the sea to look after our ships, 14 days journey from this island. Year 1362"

So reads the inscription on the famous/infamous Kensington Rune Stone, found in 1898 by Olof Ohman, a farmer in Kensington township in west-central Minnesota. It is now kept in a museum in the nearby city of Alexandria.

All of the above is true.

Everything else about the Rune Stone- its authenticity, language, meaning and age has been vigorously debated since its discovery. It has undergone a resurgence in interest in the last ten years, with new evidence suggesting that it is not the hoax proclaimed by some in academic circles. The chief objections to it were primarily linguistic as it was believed that some of the runes and some of the word-forms on the stone were not known in the 14th century. Recent research by Richard Nielsen and others has disproved this, but academic tradition is resistant to change.
The inscription concerning the location makes little sense in relation to where it was found, but Thomas Reiersgord's The Kensington Rune Stone- Its Place in History suggests, with a wide variety of evidence, that the stone had been held as a sacred object by the Dakota Indians until the mid-1800's, when it was moved and buried, to be unearthed years later.

What does it mean? Any idea of visits to the North American continent by Scandinavians before Columbus was vigorously opposed by many groups (I clearly remember this from my childhood), even up until the early sixties when irrefutable evidence at L'Anse aux Meadows was uncovered.

There have been many stories about pre-Columbian European influences. The Reiersgord book adds more, presented in a logical manner. The thing I find most interesting about this whole issue is the impassioned denial by many academics of any pre-Columbian contact in central North America. It has become a belief of negation, not a scientific conclusion, and is in danger of becoming obsolete, as more finds are constantly being discovered or re-interpreted.

The Kensington Runestone Museum (photo credit) is located in Alexandria, Minnesota, about two hours NW of Minneapolis on I-94. Well worth a visit, with an adjoining museum full of old stuff from the 1880s up to the 1950's...

Oh, come on, Batty. America was discovered by Icelanders. That is common knowledge.

We're just too modest to broadcast it.