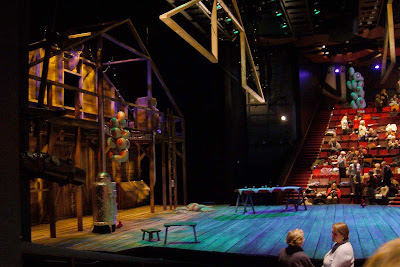 or: The Onion, Revisited

When last I tangled with the amoral hero of Henrik Ibsen's dramatic poem, it was in Baltasar Kormákur's incendiary 2006 production at the Þjóðleikhúsið- Iceland's National Theatre. Sunday we met again, this time at the Tyrone Guthrie Theater in downtown Minneapolis. Ibsen's work has been newly translated and adapted by Robert Bly, the noted poet and "Men's Movement" figure. Because Peer wasn't originally intended for the stage, some adaptation is usually needed; a previous Guthrie production that was unabridged ran over 5 hours in length. This version is framed with a modern opening and ending- a surprise 50th birthday party for "Peter" who collapses and while unconscious "imagines" the play.

Bly does the language justice, he cleverly waits until Act II to introduce the rhyming couplets, which worked a lot better than had I expected. Mark Rylance, a British actor, plays Peer with more of an oafish aspect, rather than the rakish style which is often associated with the role. The austere set (above) is minimal, this is more a play of ideas, rather than spectacle. Rylance gives a good interpretation of the famous "Onion Speech", one of the few times where he rises above buffoonery.

It is perhaps unfair to compare the intense production I saw in Reykjavík with this somewhat tepid affair. There is a tradition at the Guthrie of introducing a special "effect" into their big shows- this time it was undulating floorboards simulating a desert and an ocean- I only wish they had come up with a few more dramatic "show stoppers" instead of that gimmickry.

The play itself remains pretty relevant, touching on the evils of unbridled capitalism (including slave and arms trading), human nature and its failings (the trolls are a satiric device exploring baser urges), and of course the failure of Peer to grow into adulthood and establish meaningful relationships, and, ultimately, discover his own humanity.