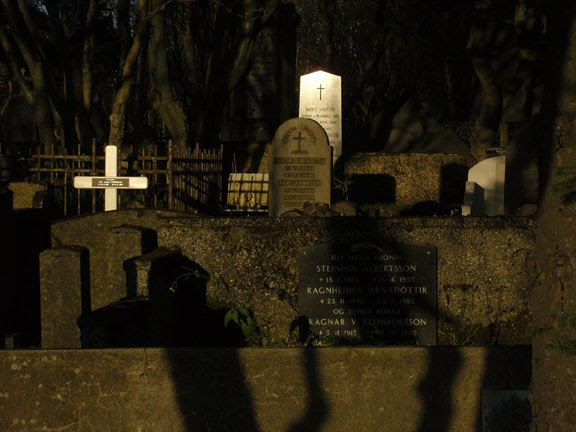 The Hólavallagarður cemetery in Rekjavík is actually not as sinister a place as this photo would seem to suggest. There is a broad sidewalk going through it, and it is used as a thoroughfare for the locals for it connects the University district to the Old Town area, avoiding the noise and traffic of some busy streets. It is actually a very nice place.

I was on this sidewalk one fine October morning, taking pictures while on my way to the swimming pool. I espied a couple of young mothers, pushing prams laden with children and shopping bags. They were at the other end, near the bell tower, and one of the women had stopped to get something out of a bag. They continued in my direction, and I in theirs, until we were in the same positions as when I first saw them, only now reversed. I spotted a ring of keys with a car fob, evidently dropped by the woman when she searched through her bag. I called out- "Pardon Me, you've dropped your keys!" (What is that phrase in Icelandic?) They didn't acknowledge me, being engaged in animated conversation. I began to trot toward them- they were about 100 meters away and moving fast. I finally did catch up with them as they were about to leave the cemetery, I returned the keys, they barely acknowledged my presence. My good deed for the day.


(... another post about an Icelandic Cemetery, in response to Rose's response to my post of last week!)

Lady of the lake said...

My favourite ex used to walk me there in the midnight sun.

Kristín- That sounds so romantic! And the view from there of the city, looking over the Pond is
beautiful as well...

Well, guess why he's a favourite!

I regret to inform you that Darri unfortunately is not one of my exes. No, this particular ex studies philosophy in Berlin and considers it prudent to seek romantic advice from his ex-girlfriend....