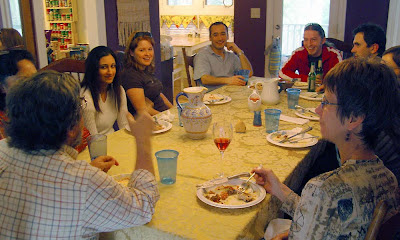 Sunday found the Weaver and me in Raleigh, North Carolina. Our hosts, Michael and Cecilia, had recently moved there from Minnesota, Michael is a professor (a REAL professor) at UNC, Cecilia is retired and the mother of two of our nephews. We had spent the day touring Raleigh- the farmer's market, the University, took a whirl about the downtown area and then we returned to their big yellow house nestled in a wooded development south of the city. We were joined for dinner by several of Michael's graduate students: Italian, German, Turkish and American. With Cecilia's Polynesian heritage it made for quite the cross cultural gathering. The conversation was lively, these were some smart kids.

Later, after the students were gone, Michael spoke of how driven they were: studying far from home, speaking in a foreign language, in a vastly different culture. He lamented that most of the American students were "9 to 5ers", unwilling or unable to put forth the extra effort to compete globally in the world of today. We talked a bit about the recent testimony that Bill Gates had given in Congress, how Microsoft had to open a large center in Vancouver because of the post-9/11 restrictions which had been placed on hiring of alien workers in the tech industries. The Senators interviewing Mr. Gates just didn't get it. Innovation and excellence is leaving the U.S., the foreign students we train here leave and enrich Europe and Asia.