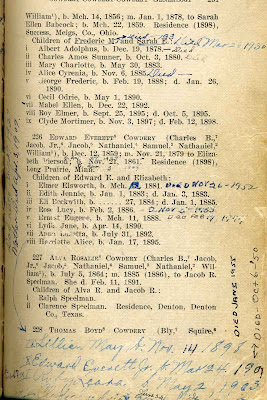 Of late there has been a small uptick of interest in my heritage. Despite rumors to the contrary, I did not descend from an alien space craft, I will use this opportunity to set the record straight.

This is a page from my family genealogy. It was researched and published in 1911 by the Frank Allaben Genealogical Company, which published many such books around that time. My Grandfather is on that page, along with his brothers and sisters and his ancestral line. He was 9th generation, therefore I am the 11th. The first, William the immigrant, came over from England in 1630 with the Puritans, not exactly a fun-loving bunch, and settled in the Boston area (Lynn), his progeny gradually worked their way westward, marrying and raising children of their own. So, if you make the assumption that the first four or five generations were of British ancestry, then gradually became diluted, by the time of my birth I reckon to have about 1.06275% English blood. Not enough to arouse the nose of Jack's Giant ("Fe-Fi-Fo-Fum, I smell the blood of an Englishman!") but the name survived. The most famous (or infamous) was "Major Jacob" a ne'er-do-well who, in the eighteenth century, disappeared one day only to return seven years later, put his gun in its usual spot and said "I've been out hunting." Court records indicated that he had gone to another state, married and had a child. When his new wife died, he returned home.
One of his nephews was the number two guy in the founding of the Mormon church. Another, barely related, family member changed his name to Sam Cody and became an
early aviation pioneer.

And me? For better or worse, Flippism Is The Key will probably be my only lasting cultural legacy.

Cultural legacy...ha....Flippism is better than most genealogical information....save for the odd golden pot remnant that predates all civilization or a mummified missing link with surprising scales or feathers in strange places. That's pretty cool but Flippism is a gold mine in it's own way. The archeology of Prof. Batty.