My Weekend With Baltasar 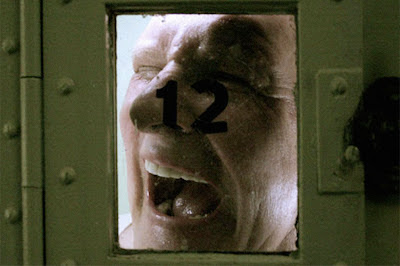 "No! No more cruddy digital projection!"

I'm not really as upset as the fellow in the picture seems to be. Actually, I'm looking forward to spending some quality time with him tonight. we've met before, via a mutual acquaintance: Baltasar Kormákur, the Icelandic director of such films as 101 Reykjavík, Hafið, A Little Trip to Heaven, Devil's Island, and a film that I'm going to see again tonight, Jar City, based on the book Mýrin by the noted crime writer Arnaldur Indriðason. I've seen 101 and a couple of Kormákur's stage productions. Furthermore, I was almost run over by him the last time I was in Rekjavík as I was leaving the National Theatre's box office!

One thing Baltasar does well is create stunning images, both on stage and in movies; the first time saw Mýrin, without subtitles, I was left with quite an impressionistic view of modern Icelandic forensics. Tonight's viewing (after having read the book) should be a little more coherent, but just as rewarding. He just won a "best picture" award for Jar City at the Prague Film Festival. It's worth a look, it will also play Monday night in Minneapolis, you might be able to catch it at other festivals this spring as well.

UPDATE: Just got back from the festival showing, the movie is as good (or better) than I remembered it (yay!), but it had been transferred to digital (boo, hiss!) with a BIG degradation of image quality. The theater was packed, the film received a good response, with a lot of Icelandic-oriented discussions going on in the lobby both before and after the showing. One viewer at a time, Rose.

If this is the only "print" in the country, it might be better to wait for the DVD or pay-for-view. Some kind of "truth in advertising" law must have been broken here, film is film and digital is digital. High quality digital is possible, but this wasn't it.

Did you buy it, Batty?

... sorry, my midnight post last night wasn't too clear, I went to a showing at the Mpls-St.Paul film festival.

Boo, what a drag the quality was substandard. And I agree, it is an excellent film, def. one of the best Icelandic films to date.

Alda- especially so since I had seen the original, where Baltasur had used different film stocks to create a mood, this showing was just mush.